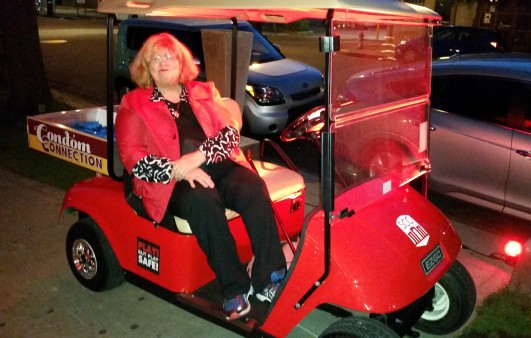 Thanks to Capital City AIDS Fund, the cart hands out condoms and safe-sex materials to college students.

CCAF called it the Condom Connection but students added the name Protect Your Panther—Panther is the school mascot. The cart traverses the campus handing out condoms and educational materials about safe sex. It’s all done under supervision of school nurses and professors. 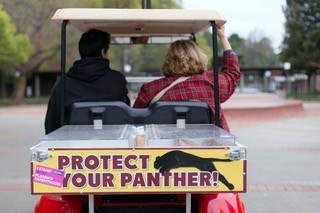 Human Sexuality Lecturer Patty Blomberg nearly owned that condom cart once it arrived on the school campus. She absolutely loved it! Patty was active in the field of sex education for decades.

The red golf cart made news December 1, 2016, on Sacramento ABC Affiliate for World AIDS Day. The innovation is the brainchild of CCAF Board Member Ted Ross. CCAF purchased the red golf cart, and Ted customized it with bins to hold a variety of condoms and informational materials.

CCAF donated the cart to Sacramento City College (SCC) and also provides free condoms. It’s all part of our aggressive education and prevention mission. To pay for donations like the cart, CCAF sells its patented condom dispensers via Total Access around the globe. The little bit of profit we make gets re-invested back into the community. In this case, it was a willing college very interested in helping to reduce HIV infections, a high rate of STIs, and unwanted pregnancies.

There’s always a story behind the story. Transporting the cart, think about it, is challenging. You need a flat bed truck to move it! And yes, there was one night that bright red golf cart was spotted travelling the streets of downtown Sacramento to attend its unveiling on World AIDS Day 2015.

That World AIDS Day, CCAF handed over the keys to SCC Vice President of Instruction Mary Turner on behalf of the president. “The cart will be an engaging fun way to open up a discussion with our students on a serious topic that is not always easy to discuss,” said Turner. 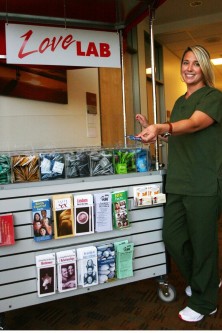 The Love Lab at UC Davis

The inspiration for the golf cart came after CCAF designed and donated a similar safe-sex cart called the Love Lab to UC Davis a few years ago. That cart is not motorized yet still distributes 100,000 free condoms a year.

Sac City College student Loreen Willenberg is a long term HIV survivor. She said that she sees the safe sex cart as a fun way to get the message across. While the cart is a lighthearted talking point, Willenberg said, “It still carries a serious message about AIDS and other diseases that needs to get across.”