I was one of those physicians providing care to gay men in New York City when AIDS first came to attention.

How did AIDS first come to public attention? For many, it was through an article in the New York Times of July 3rd, 1981, with the headline “Rare Cancer Seen in 41 Homosexuals.”

While this article, written by Lawrence Altman, was not the first report alerting us to the presence of AIDS, it is nonetheless significant because it reached an exceptionally large audience. One month before, the Centers for Disease Control (CDC) had published what could be regarded as the first “official” recognition of the presence of HIV/AIDS in the United States. 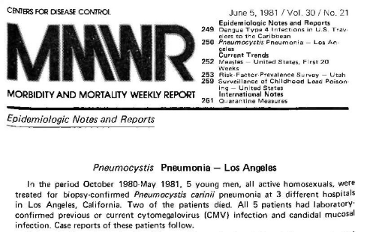 Of course, doctors taking care of gay men in New York, Los Angeles and San Francisco were aware of unusual disease manifestations among their patients well before the CDC report.

I was one of those physicians providing care to gay men in New York City when AIDS first came to attention.

I had been observing some clinical and laboratory abnormalities among my patients as early as 1979. These included enlarged lymph glands, an enlarged spleen, low blood platelets and a low white blood cell count[i]. I even wrote an unanswered letter to the city health department enquiring if they had received reports of low blood platelets in New York.

Then in April or May of 1981 I was stunned to learn that Kaposi’s sarcoma was being diagnosed in young gay men in New York, Los Angeles and San Francisco. Joyce Wallace, a physician whose office was close to mine on West 12th Street in New York passed this information on to me. She in turn had received it from the National Cancer Institute. Joyce had called them seeking a New York City specialist referral for a patient of ours whose biopsy had revealed that his lesion was Kaposi’s sarcoma. We needed this referral because at that time both of us were completely unfamiliar with this diagnosis.

Joyce was also told that Dr. Alvin Friedman-Kien, a dermatologist at NYU medical center was caring for several gay men with Kaposi’s sarcoma.

I knew Alvin. I had met him some years earlier through Jan Vilcek, an interferon researcher who had come to the United States around the same time as I did in the 1960s. Jan and I were part of what was then a small world of interferon research, he in Czechoslovakia and I in London working in the lab of Alick Isaacs, who had discovered interferon in 1957.

When I received this astonishing, almost unbelievable news from Joyce I immediately called Jan Vilcek.  He confirmed that Alvin Friedman-Kien was caring for several gay men with Kaposi’s sarcoma. He also welcomed me to the virology lab at NYU, which he headed. In this way, three years after I left the lab to start my medical practice, I returned to my prior profession, that of a research virologist. But this was only a part time return. I continued to see patients in the afternoons, after spending the mornings in the lab at NYU. This time in the lab, in 1981, proved to be very productive as we then discovered large amounts of interferon in the circulations of our AIDS patients. I wrote about this many years ago in my POZ blog.

In May of 1981, knowledge about the occurrence of Kaposi’s sarcoma and some opportunistic infections in gay men was confined to a small number of health professionals, some of whom had already known about this for many months. This is indicated in the first sentence of the CDC’s MMWR of June 5th, 1981, illustrated above. Although this report refers to the occurrence of pneumocystis pneumonia among gay men, physicians familiar with infections in the immunocompromised host recognized that both pneumocystis pneumonia and Kaposi’s sarcoma occurred in patients with disorders of cell mediated immunity. Organ transplant recipients who are intentionally immunosuppressed were the best-known example. Apart from pneumocystis pneumonia, the other opportunistic infections seen in gay men were typical of those that occur in individuals with impaired cell mediated immunity. They are typically caused by microorganisms that can only multiply within cells.

When I first knew that Kaposi’s sarcoma was occurring in gay men, I reviewed the patients I had seen who had suspicious skin lesions. One patient, Lenny, had come to see me about two months earlier with red-purple skin lesions. I didn’t then know what it was and wanted to refer him to a dermatologist. He told me that he had seen one for other problems and assured me he would make an appointment to deal with the lesions.

Armed with new information about Kaposi’s sarcoma I called Lenny to ask for the name of his dermatologist so that I could pass on what I had learned about the occurrence of Kaposi’s sarcoma in gay men. He had not even made the appointment! I asked him to see Alvin Friedman-Kien who biopsied the lesions which proved to be Kaposi’s sarcoma.

At that time there seemed to be no urgency in disseminating this information. The occurrence of Kaposi’s sarcoma and pneumocystis pneumonia among gay men, which had already been  known to some physicians in Los Angeles since October 1980, was not reported on until May 1981 with an article in the New York Native newspaper, the CDC MMWR report shown above in June, and the New York Times report appearing in July.

I called the very few physicians I personally knew in New York who had practices like my own. One thanked me for the information but told me that I need feel no obligation to pass information to others. Finally, I wrote a letter informing physicians in New York City about the occurrence of Kaposi’s sarcoma in gay men and suggesting that they refer any patients they saw to Dr Friedman-Kien at New York University Medical Center. I was about to mail these letters when the New York Times published Lawrence Altman’s report alerting the public to the occurrence of Kaposi’s sarcoma in young gay men. The letter I wrote, but never sent is in the archives of the London School of Hygiene and Tropical Medicine. It is the earliest dated document about AIDS in their collection.

I suspect that something else may also have been at play when AIDS first came to attention in New York City. I remember 1981 as a time of great competitiveness, when individual achievement had become valued ahead of any sense of social obligation. There probably has always been some tension between competition and collaboration among scientists, but in 1981 competition seemed to be the only way. In that climate the epidemic may have been primarily seen by some as an opportunity for self advancement.

[i] Unfortunately, my medical records from that time are no longer available.