Meth Use By Gay Men Remains Stable After 2014 Uptick

We have the 2017 stats, which have not been previously reported. I asked the health departments in all three cities to provide the numbers.

The good news is that meth use among gay men in NYC, SF, and LA hasn’t kept rising after an increase between 2011 and 2014 when rates in NYC more than doubled. The bad news is that use hasn’t dropped since then either.

There’s only one study that has consistently surveyed gay men about their meth use over time -- the CDC’s National HIV Behavioral Surveillance (NHBS) study that surveys gay and bisexual men every three to four years in twenty U.S. cities with high HIV prevalence.

I’ve been reporting on these findings since 2008 when NYC and SF showed a huge drop-off in meth use after a flurry of meth-prevention activism in the gay community happened nationwide between 2004 and 2006. You can read my first story on this here: Studies Show Huge Drop in Meth Use Among Gay Men in NYC.

2011 saw a further drop in all three cities, although not as pronounced. And then sadly, the trends reversed, with some big ticks up in 2014, especially in New York. You can read my story on that bit of bad news here: It’s Back! Meth Use By NYC Gay Men Rising Again.

And now we have the 2017 stats, which have not been previously reported. I asked the health departments in all three cities to provide the latest numbers. San Francisco showed a small increase. Los Angeles showed a small drop. And New York City showed no change. 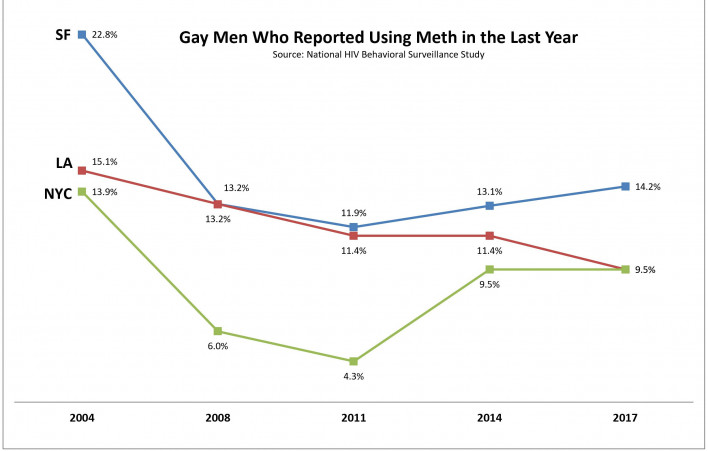 I still maintain that the prevention activism done within the gay community between 2004 and 2006 made a difference. We had a national discussion about meth and how it can destroy lives so easily. But each new generation of gay men needs to have this discussion, and do so lovingly. There’s a difference between talking truth about the drug’s often harmful effects and stigmatizing users. When I came out as a recovering addict in late 2003, I was labeled a “meth-head” and worse by many in my own community. Their attitudes only made the crisis worse, so we pushed back hard against them.

Speak honestly to your friends who might be heading towards addiction (FYI -- not everyone who tries or uses meth becomes an addict). But save them with caring and love. The history of gay men taking care of their gay brothers is both beautiful and uplifting. We know how to do this. Let’s follow in that great tradition.