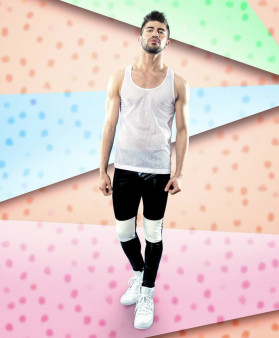 Our Pulse Is Stronger Together

How I learned that every contribution to our community counts, no matter how big or small

Each and every day, I like to set aside a few moments so I can appreciate certain pleasures. Right now I’m sprawled out on my bed after a productive day, and  I’m listening to slow, soft jazz. I’m enjoying the glow of a candle I bought in the summer getaway in Cape Cod—it even smells like Provincetown. The overhead lights are dim, and the candlelight glimmers off the mirror on my sliding closet doors to help reflect more light around me. It’s quite a romantic setting, and I’m grateful for it.

I remember when I was on tour with the Drag Race girls in 2016, I made the time to gather my thoughts and practice gratitude. I could count my blessings in either a hotel room or my bunk aboard the tour bus away from everyone else. There were even times when I’d pause before going on stage and I’d take a second to enjoy being alive and doing what I was doing—because had my life continued down a drug-fueled path, I would have ended up dead. Then again, I wasn’t really living back then anyway.

It was June 12, 2016, and I remember the energy being grim as we all boarded the tour bus in Milwaukee to transport us to Minneapolis. I felt a chill in the morning humidity, and as I was waking up with my morning cup of coffee to go, Ginger Minj delivered some bad news— there had been a mass shooting at Pulse Nightclub in Orlando, Florida.

Remember those blessings I had talked about counting? They seemed to go away as we all grew emotional. It was particularly upsetting because one of our performers is from and based out of a Orlando. We had very little information other than the current kill count and the commotion that was arising as people started waking up and jumping on social media.

I cannot tell you all of the details of the day out of respect, but I will tell you that many were worried and scared to perform that night; I was one of them. The conversation arose that maybe we’d have to cancel the show that night. During the back-and-forth dialogue, I said I wanted to perform and thought it necessary to do a tribute to those lost, but also to stand up and be strong leaders in the community and say that we are still here doing what we do because no one will silence us.

There’s nothing that can ever change or take back what happened in Orlando, but there was a moment where Ginger Minj stepped out onto the stage at Mill City Nights, a concert venue in Minneapolis. The room went silent as she spoke about her hometown andbegan to perform a song dedicated to her family and friends in Orlando. It was a beautiful moment, seeing our community come together—and not just in the theater. All across the globe, love poured in to Orlando from everywhere that day. I’m that moment I was grateful to be exactly where I was, witnessing strength like no other.

In my previous blog post, I mentioned raising money for Broadway Cares/Equity Fights AIDS while on the road (I did this through online donations). Something many people don’t realize is that BC/EFA awards grants nationwide, sometimes even worldwide. That year they gave a percentage to Pulse Orlando for the victims’ families, and it was yet another moment that I knew I was exactly where I needed to be. I had no regrets, and I only felt empowered.

There’s never a reason to feel like we don’t belong. I spent so much time feeling different until I learned how to do my part in the world. Remember: No matter how big or how small, every contribution counts.