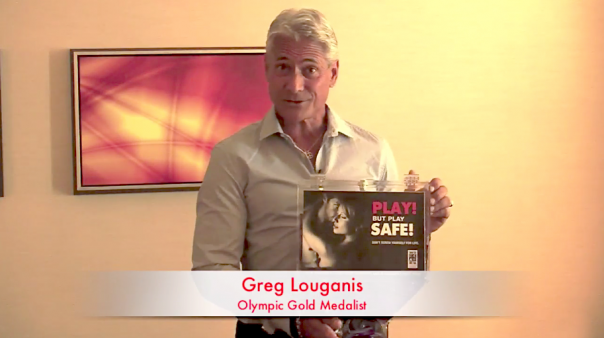 Plus: How Greg Louganis supported the scholarships and spread the word about CCAF condom dispensers

My profession is television, and I’ve often coupled the craft of TV with my HIV/AIDS volunteer life in Sacramento, California. I’ve received five Emmy Awards for the documentary work I’ve done, one about HIV/AIDS.

In 1995, I co-founded Capital City AIDS Fund (CCAF) and with my all-volunteer board, we’ve raised more than $3 million for HIV/AIDS services in the region. CCAF is a nonprofit organization that raises awareness and funds for HIV/AIDS education/prevention while also investing in people living with HIV/AIDS.

CCAF operates two important programs: Helen Veress-Mitchell Scholarship Fund and CCAF’s Prevention and Education Program. The scholarship fund distributes money to HIV-positive youth to help them attend college. Named in memory of my mother, it is by far one of the most important endeavors I’ve ever undertaken.

Often, because of stigma, people feel they need to hide their HIV/AIDS status. Students will ask why I care about them. I answer, “Because I do.” We require our students to maintain at least a 2.0 GPA and want them to keep applying year-after-year until they graduate. By investing in our students, we find they then invest in themselves and we often see grades go up to 4.0 GPAs. 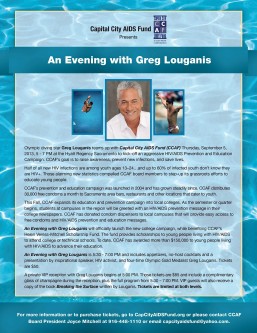 Our invitation to a special fundraiser

CCAF writes grants and holds fundraising events to support the scholarship program. A couple of years ago, CCAF held an event called An Evening with Greg Louganis. The Olympic Gold Medalist and diving great met dozens of our students, did a meet and greet with other attendees, and delivered a powerful speech. The event helped us raise money for scholarships. 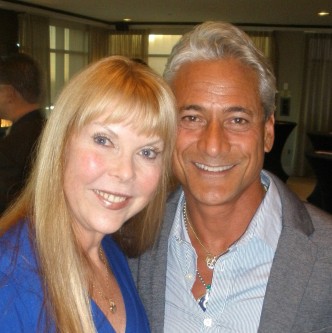 We know that by preventing an HIV infection, we potentially save a life and help prevent a chronic disease that can cost up to $20,000 annually per person to treat. A 7-cent condom can prevent an infection and make a big difference.

You can watch a video of Greg introducing our condom dispensers—and learn more about them—at CondomDispenser.org.

A big shout-out and thank you to Greg Louganis for his help with our condom dispenser video—and our fundraising event for HIV-positive college students. Standing together, we shine like gold.