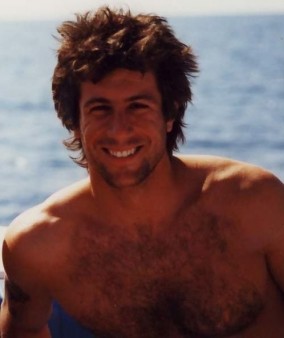 Stephen Gendin, one of the truly great AIDS activists, died a decade ago, on July 19, 2000.  A few days ago, a group of Stephen’s friends, and his father, gathered in New York to remember him.

He was an exceptional person, a close friend and someone I think about often and miss tremendously.  Here’s a link to a brief video about Stephen, including humorous

footage from a local news station in his Michigan hometown when he, as a teenager, became a member of Mensa.

Stephen and I met in 1988 through ACT UP/New York, when he was a recent graduate of Brown University and we were both on ACT UP’s fundraising committee.  By day he worked in the development office of the Archdiocese of New York and by night and on weekends was an AIDS activist.

I was appalled that he was working for the anti-condom, anti-HIV prevention Archdiocese (this was not long before we began planning the demonstration at St. Patrick’s Cathedral) and vowed to get him more suitable employment.  He went to work on my campaign for Congress in 1990 and then (after I lost the race) he joined my company, helping to raise funds for community non-profits, co-founding Community Prescription Service and playing an integral role in the success of POZ.

Stephen and I had very different approaches to HIV treatment.  While I then viewed pharmaceutical treatment as a last option, and sought to take as little treatment as was necessary

for me to stay healthy, Stephen was a willing guinea pig, his body a non-stop experimental laboratory for new treatment strategies.  His curiosity and courage contributed to what we have all learned about anti-retroviral treatment.

While we differed in our approach to treatment, neither of us ever felt compelled to prove one another wrong.  We recognized that there are many paths to survival and each of us needs to find our own.  We were determined to reflect the diversity of approaches to treatment in POZ, avoiding any given “party line”.

This individualized approach to treating HIV seems to be going by the wayside, in favor of treatment regimens shaped by pharmaceutical companies competing for market share, recommended by NIH advisory committees with pharma-funded members and often relied upon by clinicians lacking the independence, perspective and experience necessary to treat people with HIV as individuals rather than using a one-size-fits-all treatment approach.

Stephen wrote with a searing and sometimes painful honesty; the topics he addressed in his columns and articles for POZ are just as relevant today as they were when originally published. Also, check out POZ blogger Shawn Decker’s touching reminiscence about Stephen.

For more than a decade, Stephen and I had an ongoing conversation about the epidemic, our community, our friends and our own prospects for survival.  I miss him and can only speculate what we have all lost by his absence. He is greatly missed.