I’ve often said I’m more likely to die traveling to speak about AIDS than I am to die from AIDS itself.

The weekends’ travels only reinforced that opinion.

On Friday, Gwenn and I left home, on our way to Milford, PA, to speak for the Pike County AIDS Awareness Day, and the 6-hour trek took close to 10 hours, delayed by traffic, rain and fog.

Along the way, we enjoyed a stop at a hopping diner called Bakers Restaurant in Dillsburg, PA. The place was packed, and I had a fish dish called “The Belly Buster”, which would have been a dramatic end to my life had I attempted to eat the very large portion provided.

After stuffing our faces, we got back in the car, resigned to our fate as the rain came down. The windshield wipers had been pitiful for months, but after the break at Bakers, we realized that driving with a windshield wiper that was smearing water on the windshield, like butter to bread, probably wasn’t the smartest move.

So we used the GPS to find a Wal-Mart.

It was a Super Wal-Mart, or whatever they call them when they are larger than the fish portions at Bakers. Either way, we were all set... instead of reading the directions on how to replace the windshield wiper blades out in the rain, Gwenn suggested we do it inside Wal-Mart.

But after 10 minutes, I got impatient, wondering if this roadtrip would ever end.

“This will make more sense,” I said. “When we snap off the old wipers.”

This story would be better if I broke them off, or accidentally stabbed myself and ended up in the ER. But unfortunately for you, the reader, neither of those things happened. The old wipers stayed on, clinging for dear life. So Gwenn and I got a little pissy with each other for our combined lack of skills, threw the new ones in the backseat and continued the harrowing drive in the rain to Milford with limited visibility.

I mentioned the very easy travel to our last talk at Salisbury University. This weekend was the karmic payback for that.

Part of the purpose of this trip was to catch up with my one of my Godparents, Sean. But he was out of town for the weekend, a cruel twist of fate. Still, he was kind enough to let us stay at his hotel, the Hotel Fauchere, which we arrived at during the late hour of 12:30 a.m.. I watched the tail end of The Soup and Poker After Dark- my favorite TV show- and then went to sleep.

The next day we spoke at Father McGinty’s church, The Good Shepherd. He’s a very cool guy, and this was the second year in a row that Gwenn and I have been there to participate in the Pike County AIDS Awareness Day. Father McGinty, in a nice Irish accent, said that he’s waiting for someone to offer me ten million dollars to turn My Pet Virus into a movie. Then Jan, who organized the event, said, “You and Gwenn should play yourselves, you’re both so beautiful!” 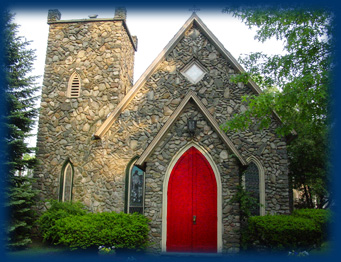 The Good Shepherd Church in Milford, PA. A friendly place for positoids.

Soon the ego-stroking and HIV educating was over and, as we exited Milford, I said to Gwenn, “We need to swallow our pride.” So we stopped at an Auto Shop, where I asked Gwenn to bat her eyebrows at the guys in an attempt to get one of them to put those wipers on.


Yes, I meant to say “eye-lashes”. But it was raining and I was already dreading the drive back. I was also unsure as to whether Gwenn and I sucked at the talk or not. The Vaunted Decker Vocabulary Magic that Gwenn has come to love was nowhere to be found in the car, and I wasn’t sure about how I did at the church, either.

As I sat in the Subaru Outback, wearing my black cashmere pull-over sweater, Gwenn threw the auto guys some red meat. “My husband is absolutely useless,” she said, batting her eyebrows as they looked out and saw me sitting in the car, trying my best to look manly and failing miserably.

The line worked. They hooked them up in less than 15 seconds, and soon we were on the road.

On the way back things were easier: we could see, and 3 hours of the 8-hour trip were rainless. Plus, we stopped at the Middlesex Diner, our favorite diner outside of our hometown Italian Villa. It’s four hours away, and this was probably the fifth or sixth time we’ve been there. (That’s a pic of Gwenn surveying the menu.)

Gwenn and I spend a lot of time educating about HIV/AIDS and explaining that, by and large, we lead a pretty normal life with my pet virus. When I got home, there were nice messages from the folks in Milford, who were moved by the talk- I guess I didn’t suck too bad! One of the girls there had actually heard of me before- via Synthetic Division.

I gott admit, it felt nice to be known for something other than having AIDS.

We’re settled in for the next few weeks, and I’m happy to be home and practicing some of what we preach- just living our domesticated lives the way a lot of other couples do. I plan to enjoy it, as I bide my time until that $10-million offer comes through.