UPDATED: Small-Town Democracy in the Age of Trump

POZ founder Sean Strub is a self-described “leftie gay guy with AIDS for mayor” in a documentary on Amazon Prime Video.

In 2019, to mark the 25th anniversary of POZ, we caught up with POZ founder Sean Strub. In addition to being the executive director of the Sero Project, a network of people living with HIV working to fight stigma and HIV criminalization, he is mayor of Milford, Pennsylvania.

In 2016, he was unanimously appointed mayor by the town’s council. In 2017, he was elected mayor. It was not his first time as a political candidate. He was the first openly HIV-positive person to run for U.S. Congress in 1990, and he details his candidacy in his 2014 autobiography, Body Counts: A Memoir of Politics, Sex, AIDS, and Survival.

The ups and downs of his campaign for mayor were captured in a documentary by Dutch journalist and longtime friend Max Westerman. Titled My Friend, The Mayor: Small-Town Democracy in the Age of Trump, the film is now available on Amazon Prime Video. Watch a trailer for the film above. 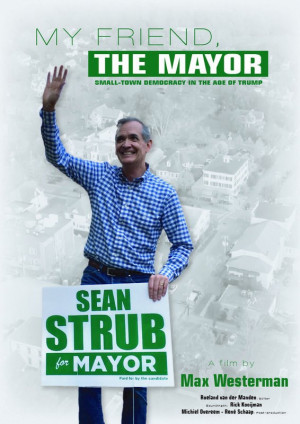 “When Sean Strub, one of my most liberal and politically active friends, told me he was running for mayor in a small town that voted for Donald Trump, I didn’t think he had a chance,” said Westerman, who has known Strub since they both attended Columbia University in the late 1970s, in a press release.

“When I visited Sean during the campaign, I discovered not only that he had a chance, but I saw the adage ‘all politics is local’ in action. Ultimately, Sean gained support because his constituents saw him as a neighbor, more so than as a partisan label,” he continued. “To Europeans, it would typically not make sense to vote for such ideologically opposite candidates for national versus local office. But for many Americans, it is desirable, as they see it as bringing a balance to the political system.”

In the trailer, Sean describes himself as a “leftie gay guy with AIDS for mayor.” The town voted for Trump. Even his campaign chair voted for Trump. And yet, Sean won the election. Understanding the dynamics behind his electoral victory seems more important than ever. Tune in to Amazon Prime Video for the full story!