Our esteem for their HIV activism—from the red carpet to beyond—is a constant.

Celebrity is a curious thing. It is an exalted state of being that doesn’t apply only to movie stars or the glamorous creatures on the red carpet. Celebrities are often beloved not because they have fame and fortune beyond our reach but because they might be us. In their faces we can see ourselves, wrapped in a different package, perhaps, but fighting hard for something we, too, believe in.

That is especially true in the HIV arena. We bestow celebrity status to community-based heroes as much as to the famous because we know the courage it takes to speak out as a person living with HIV or to stand up for us as an ally.

The people chosen to grace the covers of POZ through the years are a testament to these qualities. They might be a celebrity from Hollywood or sports, an AIDS activism icon or an emerging advocate bringing new energy to the field. Our esteem and gratitude for them is a constant.

Pedro Zamora appeared on the third issue of POZ and brought with him celebrity in all the forms we admire. He was a newly minted television star, appearing on MTV’s hot new reality show, The Real World, and he was an HIV advocate finding his voice and using his new national platform. He disclosed his status as a gay man living with HIV to an enormous TV audience, and, over the course of a few episodes, he became a star.

Zamora was beautiful. He left us breathless. He knew who he wanted to be and the impact he wanted to have. Only months after he appeared on the August/September 1994 issue of POZ, Zamora died of AIDS-related complications at age 22. The world mourned along with us because he allowed us all to get to know him with all the intimacy the new genre of reality TV allowed. Everyone, it seemed, was a little bit in love with Zamora.

Larry Kramer, the godfather of ACT UP and GMHC, was photographed in stark black-and-white on the April/May 1995 cover, and he was grinning. It was a cheeky expression for a man so famous for his righteous anger, and the first of three cover appearances the mercurial writer and activist would make.

Conservative social critic Andrew Sullivan wrote the first Kramer cover story (Kramer would return the favor for Sullivan’s cover story two years later), in which Sullivan has a meeting of the minds with Kramer, with whom he often disagrees. “Whatever history makes of Larry Kramer’s role in this epidemic,” Sullivan wrote, “it will have to record that...Larry Kramer was right.” 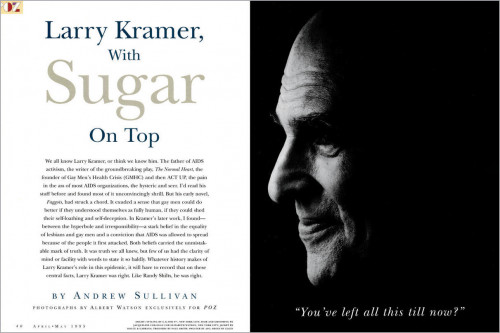 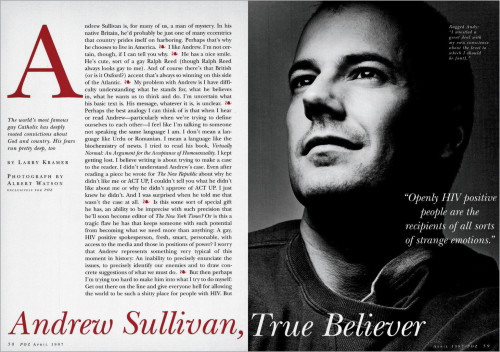 The world of sports was delivered a shocking blow when basketball star Magic Johnson announced in 1991 that he was HIV positive and retiring. For advocates, the news was met with conflicting emotions: deep empathy for a man who was dealing with his new diagnosis and a sense of curiosity about how one of the most famous sports stars in the world might use this as an opportunity to educate and fight HIV stigma.

He eventually formed the Magic Johnson AIDS Foundation, but the normalcy of what he did in the years that followed his announcement changed public perceptions of people living with HIV. Johnson unretired, got back on the court and went on with his life.

“America remains largely ignorant about the nuances of the epidemic, but watching Magic Johnson play major-league basketball has given us a deeper understanding about the possibilities of life with AIDS,” wrote Bruce Schoenfeld in his 1996 POZ cover story about the athlete. “No other person with HIV has driven home that point so clearly; Johnson does it every working day.” 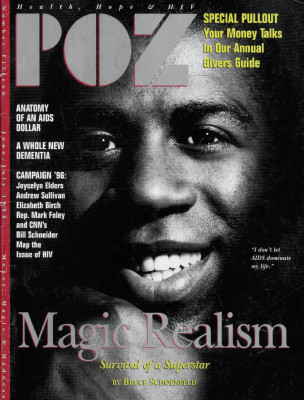 The theater community has suffered massive losses over the years, so the ebullient face of Broadway composer Jerry Herman on a 1997 cover of POZ was a joyful, soothing balm. The tunesmith behind Hello, Dolly! credited the advent of protease inhibitors, a new class of HIV medications at that time, for his renewed vigor, and he expressed pride over his part in bringing the drugs to approval by the Food and Drug Administration (FDA).

“My medical records were sent to the FDA along with many hundreds of others to help get the drug approved,” Herman said. “I think that’s the best thing I’ve done for this world.”

Speaking of joy, the wide-eyed exuberance of cover subject Hydeia Broadbent, who was all of 4 feet tall and 13 years old when she appeared on the October 1997 POZ cover, inspired readers everywhere. With a preternatural charm and intelligence, the barely-a-teen, who had been living with HIV since birth, made HIV education the mission of her young life.

Broadbent’s cover story included her words in front of the 1996 Republican National Convention, spoken to a TV audience of millions. “I am the future, and I have AIDS,” she said. 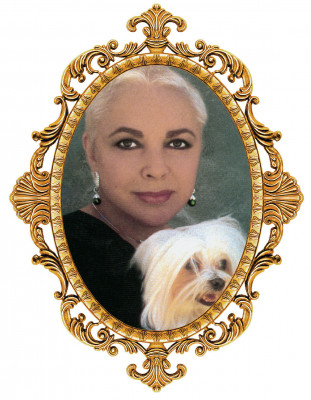 The cover of POZ traditionally featured a person living with HIV on its cover—that is, until the November 1997 issue. That is the month that AIDS activist and film legend Elizabeth Taylor appeared on the cover in a photo taken by her close friend, actor Roddy McDowall.

All of Taylor’s candor and beauty were on display in the cover story. Even while recuperating from brain surgery, Taylor remained feisty and laser-focused on her HIV advocacy. The founder of both The Elizabeth Taylor AIDS Foundation and amfAR, The American Foundation for AIDS Research, was reflective about the source of her altruism.

“I find being ‘Elizabeth Taylor’ really boring,” she said. “I think if you were born with privileges—or given privileges—then you should share them. Like money—it’s to share. I’ve known too many people who just sat and hoarded and were miserable. Just miserable SOBs. I have always believed that giving is one of the reasons that we were put on this earth.”

The famously shy Olympian Greg Louganis opened up to POZ about his life more than 10 years after hitting his head on a diving board at the 1988 Olympics—and facing backlash when he revealed in his 1995 memoir that he was gay and living with HIV at the time of his accident.

By the time POZ featured Louganis on the cover in 1999, he had grown philosophical about the incident and the media frenzy that followed. “When the book came out, there were all these debates on blood in the pool and all that,” Louganis said. “A lot of good information was getting out there, and that made me feel OK. It’s important to know how you get HIV—and how you can’t get it. And you cannot get HIV from a chlorinated pool.”

Famed photographer Herb Ritts was known for his work behind the camera, but he took the spotlight on the cover of the April 2003 issue for a posthumous story about honesty in obituaries. Since the early days of AIDS, obituaries have often skirted the cause of death to protect the family or avoid HIV stigma. But Ritts’s death from “pneumonia,” as stated by his publicists, struck many as disingenuous. Nevertheless, out-lets such as The New York Times repeated the claim without further questions.

“It was downright creepy to see a Reagan-era euphemism for AIDS pop up as the cause of Ritts’s death in obituary after obituary,” activist Michelangelo Signorile said in the piece. “Once again, this is a disease that dare not speak its name.” 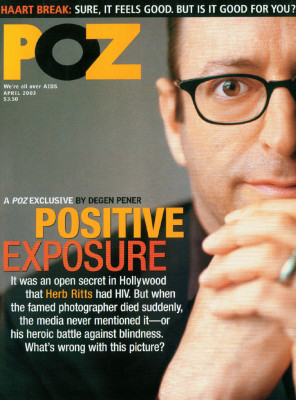 One of the most profound experiences in American theater of the late 20th century was arguably Tony Kushner’s Angels in America, which took on mythic status for anyone who had the good fortune of seeing it onstage. An HBO production of the play, directed by Mike Nichols, became the lead subject of the December 2003 issue.

Emma Thompson appeared as the titular angel on the cover, representing an all-star cast that included Meryl Streep and Al Pacino. The trenchant drama, “a gay fantasia on national themes,” blended big political debate with the intimacy of illness and death during the early AIDS crisis.

Actress Sharon Stone brought pure Hollywood glamour back to the cover in December 2007, in a story about her prodigious skills as a fundraiser for amfAR. Rather than push the tragic aspects of the epidemic, Stone was proving quite effective at using her high-wattage star power to encourage, charm and cajole major donors out of many millions of dollars.

“She wields her beauty, her figure and her Hollywood persona to maximum effect,” wrote editor-in-chief Regan Hofmann about the formidable star. “The mix is made all the more powerful by an ingredient especially compelling in a big blonde: big brains.”

The power of Washington, DC, is an intoxicant as heady as all of Hollywood, and few things can be more effective than having a compelling political figure in your corner. The January/February 2012 cover story was a profile of Democratic Congresswoman Barbara Lee of California. The former social worker has made a political career of speaking up for the vulnerable and underserved.

Representative Lee was covered because of her agenda to get global aid to countries dealing with AIDS, make medications affordable in the United States and fight the unjust criminalization of people living with HIV. “Make no mistake,” Lee said. “The world definitely has the money to end AIDS.” 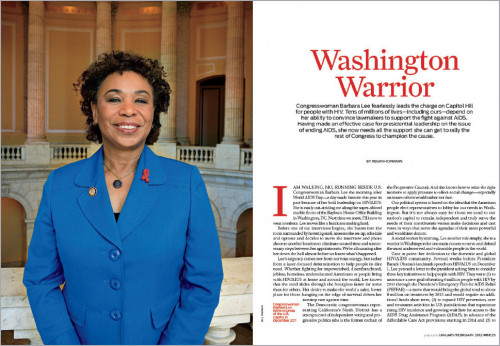 There are titans of the music industry, and then there are living legends like Elton John. A longtime friend and ally of people living with HIV, John appeared on the December 2012 issue on the occasion of the release of his book, Love Is the Cure. The memoir revisits his drug and alcohol addiction and recovery and how his friendship with teenager Ryan White inspired him to more fully commit to the fight against HIV.

The day before Broadway star Javier Muñoz took over the lead role in the musical phenomenon Hamilton, he told The New York Times he was living with HIV. There aren’t many larger stages in the world on which to disclose your HIV status.

In his October/November 2016 cover story, Muñoz discussed his bold move. “I made the choice to disclose now to give hope to someone somewhere in this country or around the world who does not have the type of opportunities I’ve been given,” he said. “There are still people who don’t understand how the virus is transmitted. There are still people who don’t understand what undetectable means. There’s a bias that still exists. That to me is reason enough to be outspoken and to live out loud.” 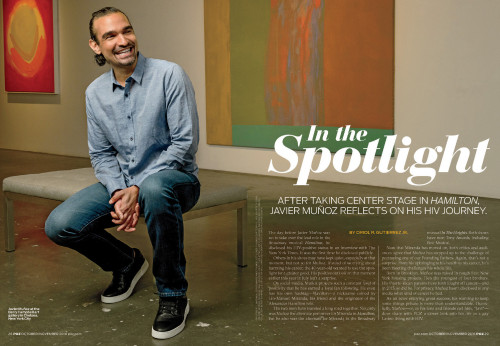 Standing alongside the big marquee names on the cover of POZ over the years are a legion of community advocates and newsmakers held in tremendous esteem by our community. To begin listing them would result in an avalanche of names, a veritable landslide of the deserving, the heroic, the game-changers and the grassroots advocates doing their work on the front lines every single day.

We know the people living with HIV speaking up at the planning meeting or the candlelight vigil. We watch them launch new programs, spread treatment news, tell their stories, lead a community. We see them on the pages of POZ, and we relate to them because we know what it means to stick our necks out, take a stand, risk rejection and speak up.

We look up to the stars, and we see ourselves.

An except from POZ at 25: Empowering the HIV Community Since 1994 by Smart + Strong. Copyright © 2019 by CDM Publishing, LLC. All rights reserved.