POZ writers and artists have thrived at the magical intersection of lived experience and boundless talent.

From that gorgeous, glossy debut issue in 1994, it must have been clear that when it came to contributing writers and artists, POZ would be no ordinary magazine.

The cover boy was Ty Ross, the photogenic HIV-positive grandson of conservative icon Barry Goldwater, and the writer was the equally adorable gay and HIV-negative Vanity Fair and Interview magazine hotshot Kevin Sessums.

The conclusion of their story was that subject and writer, having indulged in politically charged question-and-answer foreplay for hours, went to bed together. “We hold one another tightly before we begin to remove each other’s clothes,” wrote Sessums. “Naked, our bodies find the way that they must fit.” 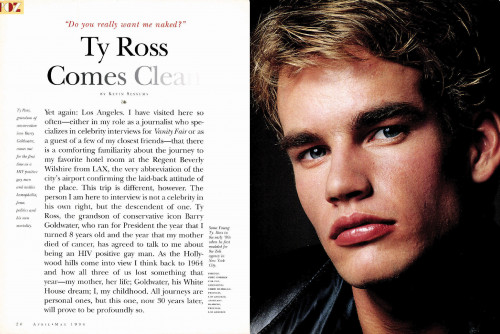 Well! Needless to say, the inaugural issue got more than a little attention. New York Times columnist Frank Rich called POZ “easily as plush as Vanity Fair” and “against all odds, the only new magazine of the year that leaves me looking forward to the next issue.”

In those heady early years to come, the magazine boasted a roster of blue-chip contributors from all the best newspapers and magazines, including the Times, Vanity Fair, New York magazine, The Village Voice and then some. (Back then, the gay/downtown New York media universe was a small world. Everyone knew one another, and everyone wanted to be part of the fight against AIDS.)

But from day 1, POZ also balanced the boldface glitter with the real-life voices and wisdom of everyday folks living with HIV/AIDS, starting, of course, with its founder, Sean Strub, who in the first issue set out the magazine’s manifesto by writing, “In my view, for a newly diagnosed person with AIDS, information is a more important first step than any pill, potion or prayer.” And indeed, in every issue, at least half the content came directly from the pens (and, often, the lenses or drawing pencils) of HIV-positive folks themselves.

But it also included a colorful stable of regular columnists writing on every aspect of daily life with the virus. “I have had the luxury of deciding whether to come out about my disease,” wrote the fabulous Kiki Mason (d. 1996) about the divide between those who could and could not pass as healthy. “I haven’t been forced out of the closet by wasting; my hair hasn’t fallen out from chemo,” he wrote. River Huston wrote about being a hetero female “sexpert” living with HIV, declaring, “I believe it is my karma to become a completely guilt-free, shame-free sexually expressive person.” 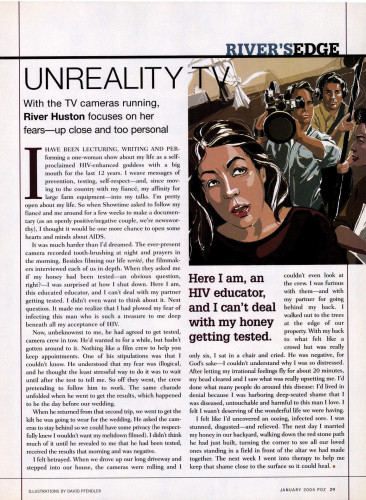 Others included David Feinberg (POZ’s hilariously self-deprecating inaugural sex columnist until his death in 1994), Dominic Hamilton-Little (d. 2011), and Shawn Decker, a young straight man from Virginia who contracted HIV from a blood product used to treat his hemophilia and went on to create an early blog, My Pet Virus, about daily life with HIV. “I’ve never smoked marijuana anyway, because I was always afraid it would lead to harsher drugs, like AZT,” was a line typical of his adorably dorky sense of humor. 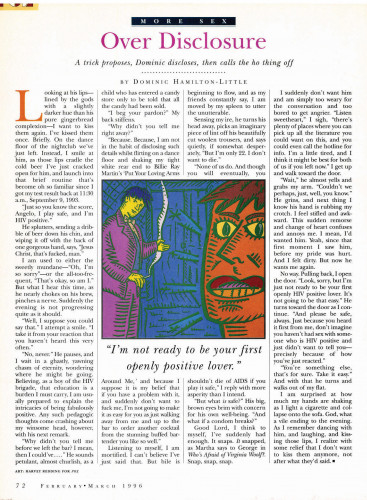 Over the years, more HIV-positive voices would join the POZ chorus. Joe Westmoreland and Bill Strubbe wrote comically yet honestly about the myriad health complications, side effects and emotional challenges of living with the virus. Shari Margolese wrote not only about being HIV-positive herself but also about raising an HIV-positive son. Mark Tuggle narrated his life as a gay Black man living with HIV, including getting sober and finding the doctor of his dreams. Beth Hastie wrote from the point of view of a lesbian living with HIV. 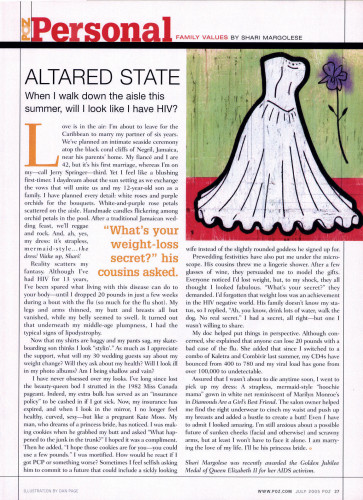 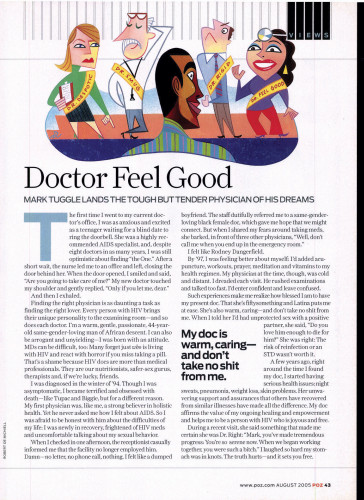 Brad Peebles, POZ’s HIV-positive publisher in the late ’90s and early 2000s, often wrote about his own struggles with med adherence and resistance. M.C. Mars brought us the truly unique perspective of a straight, tough-but-tender hip-hop cabbie living with HIV in San Francisco. “Anonymous” wrote of being a privileged white woman living secretly with HIV in the posh suburbs of New Jersey—only to finally “come out” on POZ’s cover in 2006 as Regan Hofmann, the magazine’s first HIV-positive editor-in-chief, a position she held until 2012. And in recent years, the impassioned My Fabulous Disease blogger Mark S. King has taken on thorny topics like enduring HIV stigma among gay men.

Of course, POZ has had more than its share of extraordinary HIV-negative writers, bringing with them a diverse array of expertise. Enid Vasquez, Lawrence Goodman, Catherine Hanssens, Patrick Califia, Liz Highleyman, Bob Lederer, Carmen Retzlaff, Anne-christine d’Adesky, Stacie Stukin, Esther Kaplan, Kai Wright, Rita Rubin and Jennifer Block have all delved deep into knotty issues of HIV treatment and policy, from scheduled treatment interruptions (remember those?) and alternative therapies to HIV-positive moms having HIV-negative babies to harm reduction for people who use drugs and for sex workers.

Hilary Beard and Tomika Anderson gave us deep dives into HIV in the Black community, especially on issues of doctor trust and high HIV rates among gay and bi men of color. Beloved Village Voice gossip columnist Michael Musto staked out the intersection between the epidemic and the glittery world of celebrity philanthropy. Several great writers also reported on HIV from far-flung parts of the world, including Austin Bunn in Thailand and Fariba Nawa in Iraq after the 2003 U.S.-led invasion.

In 2001, amid financial struggles, POZ nearly folded. When it got back on its feet, it was with a dramatically leaner editorial budget. For the past near-20 years, it’s really the POZ staff, HIV positive and negative alike, that has stepped up and done much of the monthly and then—with the mid-2000s web revamp—daily heavy lifting of covering HIV/AIDS in all its manifestations.

For more than a decade, Laura Whitehorn, with help from Tim Horn, helmed the treatment section, covering nearly every important study and paying particular attention to often overlooked groups such as women and people in prison. Since 2013, Ben Ryan has been providing POZ’s treatment coverage, digging into major developments of recent years, including pre-exposure prophylaxis (PrEP) and the Undetectable Equals Untransmittable (U=U) movement. Liz Highleyman, a long-term contributor, recently rejoined the fold as POZ’s science editor.

Yours truly, combining my journalistic experience with my own journey as an HIV-positive person, took on issues such as treatment-resistant folks in the post-protease era and drug pricing. Cindra Feuer reported from abroad, particularly Uganda, whose HIV prevention strategy set a global model.

Kellee Terrell often covered HIV in the Black community, including deconstructing the oversimplified idea of Black men “on the down low” passing HIV from secret male lovers to wives and girlfriends. David Thorpe put his French fluency to good use to give us piercing profiles of Haitian activist Esther Boucicault and France’s controversial, criminalization-happy Femmes Positives. HIV-positive LeRoy Whitfield (d. 2005), POZ’s first Black staff editor, wove hard-nosed reporting with his own columns about refusing treatment of his own free will and approaching death. (That was a particularly painful chapter for the POZ staff.)

Walter Armstrong, POZ’s politically and intellectually charged HIV-negative editor-in-chief from 1998 to 2005, wrote a thoughtful, usually provocative letter each month that often examined his own complicated efforts to stay negative. He also oversaw some of the magazine’s most memorably outrageous covers, including a 2003 homage to pets that featured a distinctly unhappy-looking pooch in a wig, shades and pearls. The inevitable cover line? “Without our pets, we would wig out!”

In 2012, Hofmann was succeeded by her deputy, a gay native New Yorker and former Marine, Oriol Gutierrez. The magazine’s first HIV-positive editor-in-chief of color, he continued conducting his monthly Q&As with key HIV/AIDS activists and policymakers—and also began putting a special focus on the epidemic in the Latinx community, where HIV rates among gay and bi men had begun to rise.

Through all three editorships, managing editor Jennifer “Mama” Morton has not only kept this constant flow of editorial and artistic talent on track and on deadline but has also contributed to time- and labor-intensive “roundup” packages for the magazine’s 10th, 15th, 20th and now 25th anniversary editions.

Then there are the myriad stories—large and small—cranked out by former and current staffers including Lucile Scott, Reed Vreeland, Alicia Green, Kate Ferguson, James Wortman, Joe Mejía, Trent Straube, Bob Ickes, Sally Chew, Nicole Joseph, Casey Halter and more. And we would be remiss not to mention the late Dennis Daniel (d. 2013), POZ’s comptroller and human resources manager from day 1 and the magazine’s resident expert on all matters show tunes and Broadway, especially regarding Liza Minnelli.

In recent years, the U.S. epidemic has concentrated stubbornly around Black folks, especially in the South and in gay, bi and trans communities. Those who have contributed cutting-edge reporting in this realm include Rod McCullom (who has also reported incisively about the epidemic in Puerto Rico), Mathew Rodriguez, Olivia Ford and Aundaray Guess, who has written movingly of his own experiences as an HIV-positive Black man trying to stick to his meds regimen—and receiving much-needed love and emotional nourishment from his dogs.

Fiction and poetry have been well represented in the magazine over the years as well, especially during the tenure of the lit-loving Armstrong. Poets Tory Dent (d. 2005) and Mary Bowman (d. 2019) wrote beautifully and heart-wrenchingly of life with the virus. Poet Jaime Manrique, playwright Paula Vogel and novelists Mary Gaitskill, Andrew Holleran, Edmund White and Sarah Schulman have all appeared in these pages.

Oh, and did we mention art, design and photography? From those very first issues featuring the witty caricatures by Robert Risko and the gorgeous cover portraits by Greg Gorman, POZ—often in conjunction with the group Visual AIDS, whose board includes POZ’s Jennifer Morton—has filled its pages with stunning images from the likes of artists including Barton Lidicé Beneš (d. 2012), Frank Moore (d. 2002), Ben Cuevas and the brilliant and funny collagist Tom Cocotos and such lens masters as Bill Bytsura, Arlene Gottfried (d. 2017), Kristen Ashburn and Spencer Tunick, who famously, for POZ’s 10th anniversary cover, created an installation of scores of buck-naked HIV-positive folks. (The chilly early morning setting was the late, great New York diner Florent, named after its openly HIV-positive French proprietor, Florent Morellet, who provided the POZ family with a virtual canteen for many years.) More recently, the talented Bill Wadman has taken countless luminous photos of POZ’s story subjects, positive and negative alike. 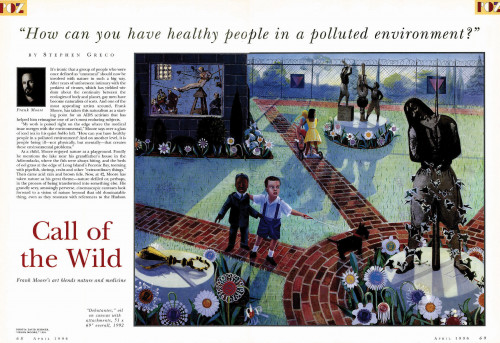 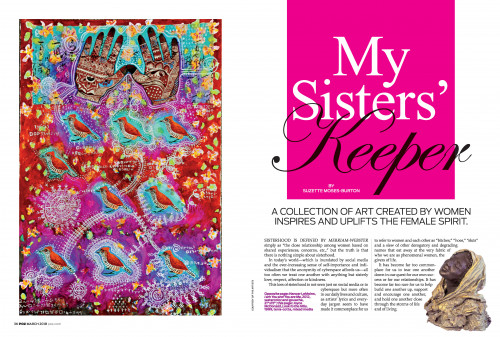 There is just one more set of POZ contributors (aside from the business folks) without whom the magazine could not have existed, and that is the literally thousands of people, in the United States and abroad, who were not afraid to speak openly about their lives with HIV and show their faces in the pages of POZ to provide comfort, courage and wisdom to readers, to break down the stigma that thrives on silence and invisibility, to make us laugh, cry, relate and empathize.

From HIV duo Michelle Lopez and her adorable daughter, Raven, to equally bite-size cover girl Hydeia Broadbent, from Larry Kramer to Phill Wilson to Hamilton superstar Javier Muñoz, and from ’80s pop star Sherri Lewis to trans pioneers Chloe Dzubilo (d. 2011) and Cecilia Chung, the folks in the pages of POZ’s first quarter-century prove that, time and again, people living with HIV and their allies have always pushed back against the forces of sickness, stigma and discrimination with a great collective cry of defiance, justice and joy. 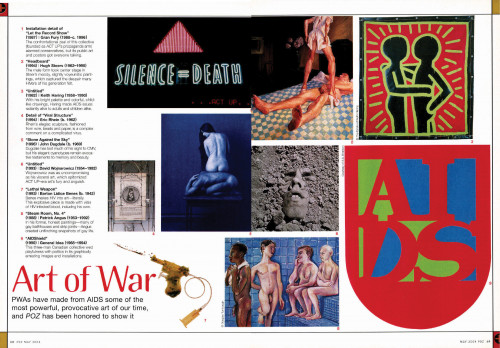