Lawsuits Against Two Eateries Are a Whopper of a Story

Los Angeles restaurant The Ivy is known for its fried chicken, crab cakes, chocolate chip cookies—and a white picket fence that blocks paparazzi from snapping shots of celebrities who frequent the hot spot. Apparently the eatery’s custom of protecting the rich and famous may not extend to its own workers. The Ivy is facing a wrongful termination suit for allegedly firing an employee because he has HIV.

Across the country in Virginia, Burger King (the antithesis of The Ivy) was slapped with a similar suit for letting go of a regional manager allegedly after he disclosed to his boss he was recently diagnosed with HIV.

Both plaintiffs are Latino men, a demographic disproportionately affected by HIV, and are being defended by the Mexican American Legal Defense and Educational Fund (MALDEF).

Bottom line: Firing an employee because of his or her HIV status is unlawful—and unnecessary. If the allegations prove to be true, it leaves a bad taste in our mouth. 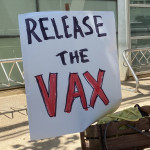