Greenwich Village to get an AIDS memorial.

Designs for the New York City AIDS Memorial have been unveiled. Located on a corner of a triangular park in Greenwich Village, across from what used to be St. Vincent’s Hospital (once the ground zero of AIDS, soon to be luxury housing) and a block from the LGBT Community Center, the memorial was designed by Studio a+i in Brooklyn and is the brainchild of urban planners Christopher Tepper and Paul Kelterborn.

The $3 million memorial, slated for completion in late 2014, is comprised of an 18-foot-tall steel canopy of triangular patterns (triangles being associated with gay people since the Holocaust, and in the 1987 “Silence = Death” AIDS awareness slogan). Angels in America playwright Tony Kushner is helping curate the memorial’s “narrative surface”—text from writers and activists to be carved on the ground in concentric circles around a piece of water-covered granite.

We’ve been hearing a lot of “it looks like a cold, sterile bus stop” comments, but we expect to warm up to the memorial once it’s complete. Share your opinion below. 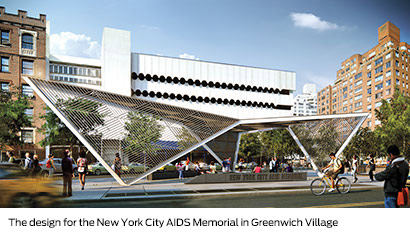