Chlamydia, Gonorrhea and Syphilis Are All On the Rise

The U.S. sexually transmitted infection epidemic is expanding, in some cases at an “alarming rate,” according to the Centers for Disease Control and Prevention (CDC). Figures on reportable STIs for 2014 represent the first time that rates of chlamydia, gonorrhea and syphilis have all increased since 2006.

“America’s worsening STD epidemic is a clear call for better diagnosis, treatment, and prevention,” Jonathan Mermin, MD, director of CDC’s National Center for HIV/AIDS, Viral Hepatitis, STD, and Tuberculosis Prevention, said in a press release. (“STD” is the acronym for sexually transmitted disease, a synonym of STI.) “STDs affect people in all walks of life, particularly young women and men, but these data suggest an increasing burden among gay and bisexual men.”

The 2014 incidence, rate of infection, and the infection rate’s rate of increase between 2013 and 2014 for each STI were as follows:

The actual number of syphilis cases, while low, is still a major concern for the CDC because the infection rate is following a steady and apparently accelerating rate of increase, driven by MSM. (Syphilis is the only STI for which information about the sex of the partner is reported.) Rates among MSM, who account for 83 percent of cases in which the sex of the partner is known, have been increasing since at least 2000.

Fifty-one percent of MSM diagnosed with syphilis in 2014 were HIV positive. Syphilis infection can facilitate HIV transmission by causing sores on the genitals.

Among MSM visiting clinics in the CDC’s STD Surveillance Network, STI rates were higher among those living with HIV. The respective prevalence rates of the various STIs among HIV-positive and HIV-negative MSM were: syphilis, 10.4 and 3.5 percent; urethral gonorrhea, 11.4 and 8.6 percent; pharyngeal gonorrhea, 6.7 and 7.4 percent; rectal gonorrhea, 12.4 and 5.5 percent.

Young people between the ages of 15 and 24, despite representing a smaller slice of the overall population, accounted for almost two-thirds of all reported STIs in 2014. Previous CDC estimates have suggested that half of the estimated 20 million new STIs diagnosed each year occur in this age bracket.

The CDC recently reported that gonorrhea is rising among MSM, with infection rates jumping 26 percent between 2010 and 2013. 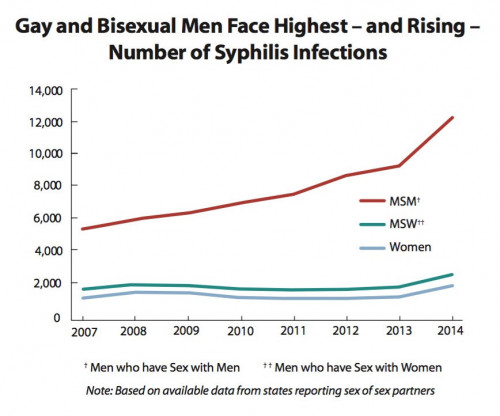