Stop dieting and learn to adore your body

How exciting to be a woman who has struggled with HIV, body image, low self-esteem and cellulite to be Sex Goddess of the World.

By the way, Maggie Estep and I are not the only sex goddesses. As Charlie Brown, a drag queen from Atlanta, would say, women, men, heterosexuals, homosexuals, bisexuals, try-sexuals, transsexuals, transgenders and fucking freaks, we all have a sex goddess within. But she’s hiding and won’t come out until we stop hating our bodies.

All the women I have known in my life, including those we admire for their “great” bodies, have felt some degree of dissatisfaction with their appearance. When I was a fitness trainer, I did a consulting job for Mademoiselle. While I was helping the model get into position for a shot, she grabbed an imaginary piece of what she called fat (which was really her stomach) and asked, “How can I get rid of this?” I told her she could have her internal organs removed. She said she would think about it.

Cellulite, I now realize, must be a good thing. Otherwise a goddess wouldn’t have it. I have heard since I was just a teeny little goddess that cellulite is disgusting, gross, ugly and totally unacceptable. When I saw the first little signs of it on myself, I took that to mean that I was also disgusting, gross, ugly and totally unacceptable. Quite a heavy burden for a 13-year-old to carry. Let the dieting begin! Oh God, what a nightmare to have spent 20 years fighting my body when it was just my sex goddess coming out.

When I was first diagnosed with HIV in 1990, I was working as a fitness trainer. I did this out of the desire to have a “perfect body.” I lives my life with salad dressing on the side--no sugar, no meat, no butter, no ice cream, no fat of any kind. I had never even tasted Häagen-Dazs before 1990. Well, that might sound healthy, but I often had to fast 10 days of the month to maintain my weight. So after receiving the news that I was positive, I went out and ordered French toast with butter and syrup. Boy, did that taste good! For the next year I used food to ease my pain, and I gained 40 pounds. I then focused on being fat instead of diseased. When I realized how destructive I was being, both physically and mentally, I began to eat well. The hardest part of this transition was, and still can be, learning not to focus on how I look. So now whenever I feel “less than” because I think I look “more than,” I just say, “It’s Goddess flesh, honey, be nice.”

Here’s how to learn to adore your body: Lie naked, light some candles, close your eyes and run your hands all over your body. Hmmm, feels good, doesn’t it? Soft and beautiful to the touch. Rub lotion into your skin and find a particular part you feel comfortable with. When you’re having a bad body day, or you have a drag queen tell you you look like Ricki Lake in Hairspray (which happened to me in front of a large audience, OK?), you can focus on the body part that’s least troublesome. My favorite parts are my feet and my breasts.

So go on and give it up, whatever your body type is. As of today, you are free! No more MTV bondage or Cosmo comparisons. You are the Sex Goddess of the Universe. Or at least your own neighborhood. 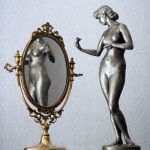