On-demand PrEP is taken only during the days surrounding sex.

No participants contracted HIV during a two-year study in Amsterdam of the on-demand dosing protocol for pre-exposure prophylaxis (PrEP), aidsmap reports.

Also known as the event-based, or 2-1-1, protocol, on-demand PrEP involves taking a double dose of Truvada (tenofovir disoproxil fumarate/emtricitabine) two to 24 hours before expected sex and then one dose 24 hours after sex and a last dose 48 hours after sex.

In 2018, a investigators behind a French study known as IPERGAY also reported no new HIV cases among those taking on-demand PrEP.

Publishing their findings in the Lancet HIV, Elske Hoornenborg, MD, an infectious disease specialist at the Public Health Service Amsterdam, and colleagues recruited to the AmPrEP demonstration study men who have sex with men (MSM) and transgender individuals at significant risk for HIV between August 2015 and May 2016.

Participants were given PrEP with the option of taking it daily or on demand. They returned each three months for follow-up visits.

A total of 367 people were included in the analysis. They had a median age of 40. All but two of them were MSM. All were white and residents of Amsterdam.

Two participants contracted HIV during the study, for an overall infection rate of 0.3 cases per 100 cumulative years of follow-up. Both of these people opted for daily PrEP. One had stopped taking PrEP several months before testing positive for the virus. The second was one of the few men in the world established as having contracted HIV while adhering to the daily PrEP regimen—a case first reported by Hoornenborg at the 2017 Conference on Retroviruses and Opportunistic Infections in Seattle. 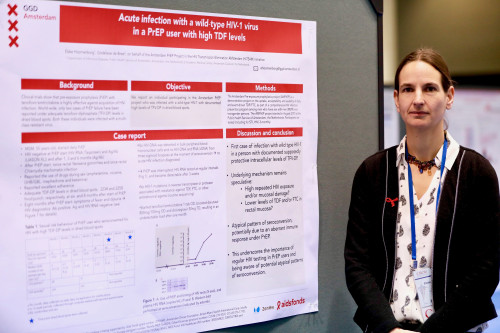 During the study’s first year, 53% of the participants were diagnosed with a sexually transmitted infection (STI), as were 48% during the second year. Overall, the STI diagnosis rate was 41% lower among those taking event-based PrEP compared with those taking it daily.

“Although the overall incidence of STIs did not change during two years of PrEP use, the incidence of STIs was higher among participants using daily PrEP than those using event-driven PrEP, which is likely a result of differences in sexual behavior,” the study authors concluded. “This finding suggests the need to tailor STI prevention interventions according to behavioral profiles.”