What’s the difference between Truvada and Descovy for PrEP?

Both Truvada and Descovy are highly effective and safe PrEP options for most people. The TDF in Truvada can cause kidney problems and a small amount of bone loss in susceptible individuals. The TAF in Descovy is less likely to cause unfavorable changes in kidney and bone blood tests, but serious kidney problems and bone loss are uncommon with either drug. Conversely, Truvada has a more favorable effect on blood fat levels and leads to less weight gain than Descovy, which has implications for cardiovascular risk.

The Food and Drug Administration (FDA) approved daily Truvada in 2012 for the prevention of sexually acquired HIV. In 2019, the agency approved daily Descovy as a second option to reduce the risk of contracting HIV through sex, with the exception of receptive vaginal or frontal sex. A large study comparing Truvada versus Descovy for PrEP did not include cisgender women or transgender men, so the FDA declined to approve Descovy for these groups until more data are available.

Learn more about the differences between TAF and TDF here. 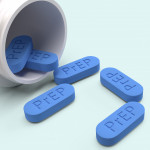