PrEP use remains largely limited to white men 25 and older, meaning groups at the very highest risk of HIV are likely not benefiting.

Pre-exposure prophylaxis (PrEP) use continues to rise in the United States, with an estimated 136,000 people currently taking Truvada (tenofovir disoproxil fumarate/emtricitabine) for HIV prevention as of the first quarter of 2017. However, use of Truvada for prevention remains largely limited to white men age 25 and older, meaning that the risk groups at the very highest risk of infection, namely young Black men who have sex with men (MSM), are apparently still not benefiting significantly from the highly effective form of HIV prevention, which has now been on the market for five years.

Investigators from Gilead Sciences, which manufactures Truvada, updated past analyses of PrEP use by analyzing electronic prescription data from about 80 percent of U.S. retail pharmacies, covering January 2012 through September 2016.

The Food and Drug Administration (FDA) approved Truvada for use as PrEP in July 2012, although prior to that time individuals could still get PrEP through clinicians willing to prescribe Truvada on an off-label basis.

The Gilead researchers had data on 84 percent of Truvada prescriptions. They factored out those prescribed for HIV treatment, post-exposure prophylaxis (PEP) and hepatitis B virus (HBV) treatment. Then they adjusted their data to project the total number of PrEP prescriptions at all retail pharmacies and, to a lesser extent, nonretail pharmacies. Their findings are limited by the fact that the data analyzed did not include information on non-retail-pharmacy means of filling prescriptions, such as Medicaid or private PrEP programs.

Findings were presented at the 9th International AIDS Society Conference on HIV Science in Paris (IAS 2017).

The investigators found that 98,732 people started PrEP at these pharmacies between 2012 and September 2016. Based on this finding, they estimated that 120,000 people were on PrEP by the first quarter of 2017. In a recent conference call regarding Gilead’s second-quarter earnings, the company announced that by now an estimated 136,000 people are on Truvada for prevention.

In other words, the total number of people taking PrEP likely continues to increase each quarter (acknowledging that not all who have started PrEP are still taking it), but this upward trend is no longer gathering steam.

The number of people found to have started PrEP per quarter in the pharmacies surveyed. (“TVD” is short for Truvada.)Mera, Magnuson, Hawkins, Bush, Rawlings and McCallister, Gilead poster presentation, IAS 2017.

Of all those found to have started PrEP in the survey data, 83,672 (85 percent) were men and 15,060 (15 percent) were women. (Presumably, the vast majority of these men are MSM, although Gilead did not make such a pronouncement.) During the first of the three PrEP-use periods, women accounted for 42 percent of PrEP starts, a proportion that declined to 12 percent during the second period and 10 percent during the third period.

The average age of those who have started PrEP is 38 among men and 35 among women. Only 11 percent of men and 24 percent of women who have begun taking Truvada for prevention have been younger than 25. This is troubling considering that according to recent Centers for Disease Control and Prevention estimates, of an estimated 26,000 new HIV cases among MSM in 2014, perhaps 30 percent (7,700) were among those between 13 and 24 years of age. 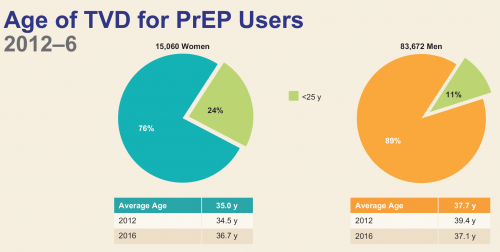 Breakdown in those who have started PrEP according to age and sex. (“TVD” is short for Truvada.)Mera, Magnuson, Hawkins, Bush, Rawlings and McCallister, Gilead poster presentation, IAS 2017.

Black MSM younger than 25 are at particularly high risk for the virus.

“Despite this trend of increasing [PrEP] use in the USA, barriers to greater use in women and younger individuals at risk of HIV should be explored,” the Gilead researchers concluded.

Whites are disproportionate users of PrEP compared with the demographics of new cases of HIV. (“TVD” is short for Truvada.)Mera, Magnuson, Hawkins, Bush, Rawlings and McCallister, Gilead poster presentation, IAS 2017.