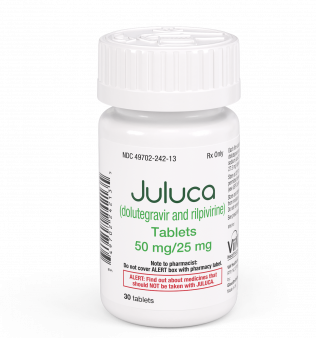 For the first time, the U.S. Food and Drug Administration (FDA) has approved an HIV treatment regimen that contains only two antiretrovirals (ARVs), instead of the standard three or more drugs. Juluca (dolutegravir/rilpivirine), a combination of drugs from ViiV Healthcare and Janssen, is approved as a new option for people with HIV who have been virally suppressed on their current ARV regimen for at least six months.

Additionally, individuals considering Juluca should have no history of HIV treatment failure and no known viral mutations associated with resistance to either of the drugs in the regimen. 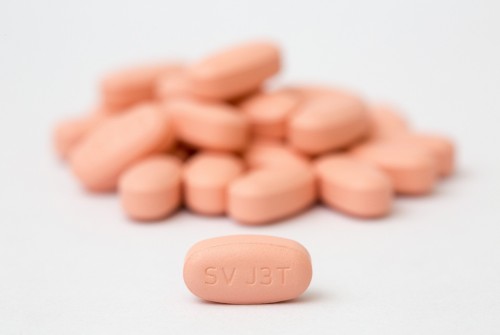 This regimen is an option for those looking to avoid nucleoside/nucleotide reverse transcriptase inhibitors (NRTIs). ViiV’s dolutegravir, which is sold individually under the brand name Tivicay, is an integrase inhibitor. Janssen’s rilpivirine, sold under the brand name Edurant, is a non-nucleoside reverse transcriptase inhibitor (NNRTI). Dolutegravir in particular is prized because it is associated with a low rate of emerging drug resistance—otherwise known as a high barrier to resistance—among those treated with the ARV.

The FDA approval is based on two identical clinical trials, SWORD 1 and 2, which included 1,024 people with HIV who were initially on successful ARV treatment. Findings from these studies were reported in February at the 2017 Conference on Retroviruses and Opportunistic Infections (CROI) in Seattle. The participants were randomized to stay on their current regimen or switch to the components of Juluca. Those who took the two-drug regimen had the same rate of viral suppression after 48 weeks (95 percent) as those who stayed on their initial regimen.

At week 48, 0.6 percent of those in the two-drug group had a viral load greater than 50, indicating virologic failure, compared with 1.2 percent of those who stayed on their original regimen.

The most common adverse health events among those taking Juluca were diarrhea and headache, each reported by 2 percent of the participants.

Fewer drugs in an HIV treatment regimen should spell less toxicity, at least in theory. Future research should indicate whether the two-drug regimen does indeed confer a long-term safety advantage over regimens including three or more ARVs, in particular with regard to bone and kidney health.