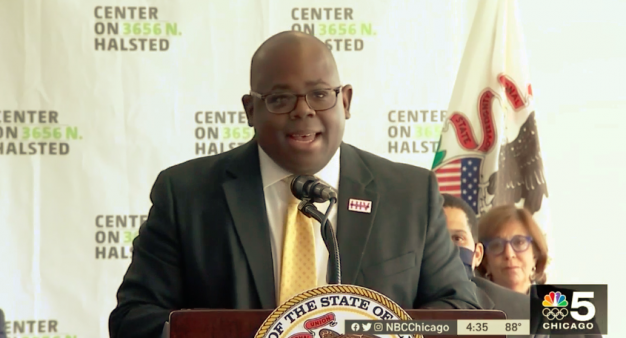 The bill takes effect immediately and makes Illinois the second state, after California, to decriminalize HIV.

UPDATE: On July 28, Illinois Governor J.B. Pritzker signed a bill to end the criminalization of HIV, which POZ wrote about in the April 21 article below. Illinois is the second state to repeal such laws (California did so in 2017; other states have reformed and updated—but not repealed—elements of their HIV laws). As NBC Chicago reports, the bill was signed along with three LGBTQ-related bills that affect marriage licenses, gendered language and the coverage of fertility treatment for same-sex couples.

Regarding the HIV crime law, Timothy Jackson of AIDS Foundation Chicago told NBC Chicago, “It is going to be a sigh of relief to not have your health condition used against you criminally. We’ve had people tell us, ‘I’m not getting tested because if I get tested and I come back positive, I could potentially be charged with this crime.’”

Lawmakers in the Illinois House of Representatives voted 90–9 to repeal a law that makes it a felony for people living with HIV to have condomless sex without first disclosing their status. The bill must still pass the state Senate, but as the Chicago Tribune reports, advocates supporting the repeal say they have bipartisan support and hope the decriminalization bill will be signed into law by the end of May.

Under the current law, people with HIV can be prosecuted in cases in which HIV was not transmitted and sentenced up to seven years in prison. What’s more, advocates point out, the law does not take into consideration the latest scientific understanding about HIV, notably that a person with the virus who takes meds daily and maintains an undetectable viral load cannot transmit HIV sexually, a fact referred to as Undetectable Equals Untransmittable, or U=U.

“We know that this law is overly harsh, discriminatory and acts a barrier to HIV testing and treatment,” Timothy Jackson, the director of government relations at AIDS Foundation Chicago and a leader of the movement to repeal the law, told POZ in an emailed statement. “Simply put, criminalizing someone’s health condition should never be the response to a public health crisis. Full Stop.

“We thank state Representative Carol Ammons (D-Urbana) for her leadership in advancing HB1063 in the Illinois House,” Jackson continued. “The Illinois HIV Action Alliance coalition looks forward to working with state Senator Robert Peters to advance HB1063 out the Illinois Senate over the next few weeks and onto Illinois Governor JB Pritzker’s desk for his signature.”

Illinois HIV law was updated in 2012, but a full repeal is needed, say advocates. Jackson pointed out that since the law was updated, it has been applied at least 22 times.

Repealing the HIV law does not mean that people cannot be held accountable for intentionally transmitting HIV, noted the Cook County State’s Attorney’s office in a statement to the Tribune that supports repeal of the law.

HIV advocates worldwide make the case for decriminalizing HIV. They stress that outdated HIV laws hinder people from getting tested and accessing care and treatment and that such laws unfairly target the minority populations impacted by HIV, including Black and brown communities and LGBTQ people.

Other states have successfully changed their HIV laws. For one example, read the POZ article “California Governor Signs Bill Modernizing HIV Crime Laws,” which details the fact that as of January 2018, it has been a misdemeanor, instead of a felony, to knowingly transmit HIV or expose a partner to the virus without disclosing.

For a basic understanding of HIV crime laws, see “Criminalization 101”; for a collection of POZ articles on this topic, click on the tag #Criminalization. To learn more about the HIV laws in your state, visit The Center for HIV Law and Policy.

In related news, youth HIV advocates recently launched a campaign to repeal discriminatory HIV laws. For details on how you can join their effort, see “National Youth HIV and AIDS Awareness Day 2021.”

For related U=U news, read “How Well Do U=U and PrEP Work? The CDC Updates Its Answers,” and check out the March 2019 POZ cover story, “Understanding Undetectable Equals Untransmittable,” along with its companion feature, “Viral Load Does Not Equal Value.”