Visual artist Jenny Holzer is famous for displaying text-based art in public spaces, such as placing short sayings on building facades and theater marquees. For the New York City AIDS Memorial, which opened in 2016, she designed the granite paving stones carved with text from Walt Whitman’s “Song of Myself.”

This summer, Holzer once again teamed up with the New York City AIDS Memorial, along with Avant Arte, an online community of art lovers, for a project that raises HIV awareness and funds for the memorial. The project includes several elements, including URGE AND URGE AND URGE, a work that consists of condoms in a handblown pharmacy jar. But not just any condoms. The wrappers on these condoms are printed with text by Holzer and Whitman, such as “Protect me from what I want,” “Expiring for love is beautiful but stupid” and “I will see you again.” 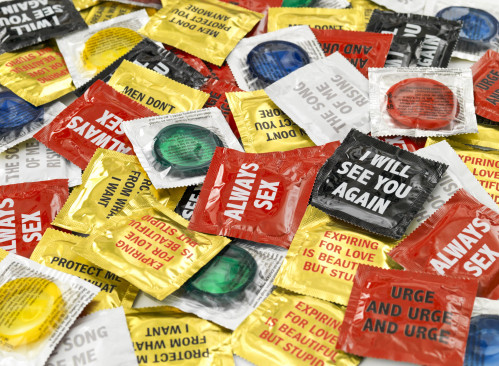 Sold on AvantArte.com for about 4,000 euros (about $5,170), the work was made in an edition of 25, all of which have been sold (you can join a waiting list on the website). According to Avant Arte, the bulk of the proceeds raised by URGE AND URGE AND URGE went to support educational and cultural programs as well as the ongoing maintenance of the New York City AIDS Memorial.

As part of the project, a truck with LED lights displaying text by Holzer and Whitman drove through historically significant areas of New York City (a similar project, #LightTheNight, took place on World AIDS Day 2018).

But don’t fret about missing out on this art. Check out Avant Arte’s Instagram feed to see samples of work by Holzer as well as Paul Thek and Darrel Ellis, two artists lost to AIDS who are being spotlighted in an effort to bring their art to a new generation.

“Jenny’s generosity, and the generosity of the artistic community in general, has long helped sustain many nonprofit organizations, including ours, and we are especially thrilled we could not only release a beautiful object but also raise funds to continue our work,” New York City AIDS Memorial executive director Dave Harper, told POZ. “I was especially proud of having a partner like Avant Arte, and being able to share visual stories of artists lost to AIDS, including Paul Thek and Darrel Ellis, with their 2 million followers, many of whom are young and likely have little knowledge of the history of AIDS and its impact on creative communities. We hope by sharing these stories, we can honor and celebrate their lives and work as well as serve as a reminder that AIDS is not over and work remains to be done.”

This is a self portrait of the black US-American artist Darrel Ellis. One month before Darrel was born his father, Thomas Ellis, was killed by police officers during a traffic control in New York. In his short, promising artistic career Darrel mainly used and reinterpreted old photographs that he found in a trove: Pictures of family and friends, made by his father in Harlem and the Bronx in the 1950ies. ⁠ ⁠ In 1992 Darrel’s work was exhibited in the MoMA New York. In the same year he died of AIDS. He and his work were largely forgotten and are now rediscovered by curator and editor Cay Sophie Rabinowitz. We show an overview of Darrel Ellis‘ work at CRONE BERLIN (opening June 27, 2020, 12-6pm).⁠ ⁠ In cooperation with OSMOS and The Estate of Darrel Ellis.⁠ ⁠ Darrel Ellis⁠ Self-Portrait, ca 1978⁠ Pen, ink and gouache⁠ 38 x 29 cm⁠ ⁠ #darrelellis #blacklivesmatter #blm #africanamerican #blacklegacy #blackhistorymonth #blackhistory #blackexcellence #gayartist #queerart #artexhibition #aidshistory #lgbthistory #lgbtq #artgallery #pridemonth #gayhistory #MoMA #museumofmodernart #newyork #art #afroamericanartist #blackartists #blackpride #contemporaryart #modernart #80sart #artinnewyork #artinberlin #artcollector

Learn more about Darrel Ellis in our stories today! #darrelellis

“Working with an artist like Jenny is a dream—and to use our collective voice to share important stories, raising awareness of the ongoing fight against HIV and AIDS through our community, has been a privilege,” added Christian Luiten, cofounder and creative director of Avant Arte. “The edition sold out quickly, and so we have been able to contribute to the New York City AIDS Memorial as well as provide meaningful and tangible funds for educational and cultural programs. Our aim at Avant Arte has always been to inspire and educate our audiences, and this collaboration is a perfect model of that, allowing art collectors to purchase work by a leading artist while also communicating to a global audience on important global matters. We have had so much positive engagement from the media and also on our social media posts. It really feels like the campaign has had deep resonance through the community.”

@jennyholzerstudio “My writing had to be short to catch the attention of passersby.… Plus, most of the subjects I chose are hard to tolerate, so I had to be quick, concise in order to be able to write the texts, and also to be merciful to readers.” #jennyholzer⁠ ⁠ from Survival (1983–85), 1989⁠ © 1989 Jenny Holzer, member Artists Rights Society (ARS), NY⁠

“We don’t need to work on joy... but one must argue with cruelty, homicide, abuse of any sort. So, I like to argue” @jennyholzerstudio ⁠ Photo: @lilikobielski⁠ ⁠ ⁠ 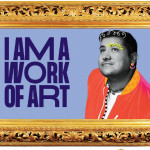