On World AIDS Day, which falls on Saturday, December 1, the crowded streets of New York will be lit up with messages about the epidemic. As part of the “interactive art experience” called #LightTheFight, five trucks with large LED billboards will drive around the city displaying quotes by activists, artist, educators, poets and people living with HIV.

It’s a collaboration between visual artist Jenny Holzer, renowned for her text-based works—including numerous pieces about HIV over the decades—and the New York City AIDS Memorial. The event marks the launch of the NYC AIDS Memorial Arts and Education Initiative.

“I hear the sound I love, the sound of the human voice, I hear all sounds running together, combined, fused or following, Sounds of the city and sounds out of the city, sounds of the day and night...” – Walt Whitman, Song of Myself #waltwhitman #quotestoliveby #quotes #pride #gay #love #loveislove #chalk #rainbow #art #jennyholzer #colorful #nyc #nycaidsmemorial #installationart ???? @lil_angel_nyc

#LightTheFight will begin with a ceremony and performance at 4:30 p.m. at the memorial, located in Greenwich Village across from what used to be St. Vincent’s hospital, considered ground zero of the early AIDS epidemic in New York.

The animated text on the truck billboards will appear in black and white with bursts of color breaking through to highlight messages, according to a press release on NYCAIDSMemorial.org. The trucks will drive through areas significant to the epidemic, such as the LGBT Community Center, Harlem, Times Square and the Hudson River piers near Christopher Street. 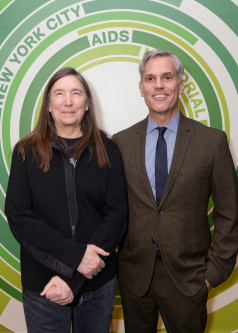 Artist Jenny Holzer, who designed part of the NYC AIDS Memorial, with Keith Fox, president of the memorial’s board of directors, at a 2016 reception at Barneys New York to celebrate the imminent completion of the memorial.Joe Schildhorn/BFA.com

“I’m working on #LightTheFight because the fight against AIDS continues,” Holzer said in the press release. “It’s crucial to maintain awareness that the AIDS epidemic is live, in New York and around the world. The messages on the trucks’ screens, contributed by feeling people, could comfort those affected by AIDS and reignite fires in bellies to end AIDS forever.”

The press release also includes images of Holzer’s similar work, IT IS GUNS, from earlier this year.

Holzer also contributed to the NYC AIDS Memorial itself. She created an installation of engraved text from the Walt Whitman poem “Song of Myself” that encircles a fountain at the memorial.

#regram from @wallpaperguides The New York City AIDS Memorial marks the West Village site where the hospital at the centre of the fight against the epidemic stood until 2010. Brooklyn-based Studio a+i’s design is an amalgamation of triangles, with alternating perpendicular planes, that forms a graceful canopied entrance to St Vincent’s Triangle Park, a new 4,500 sq m public space. The memorial is unadorned by individual names or information, but instead pays tribute to the 100,000 New Yorkers who have died from AIDS with the only permanent Jenny Holzer installation in the world: inscribed into the granite paving stones in a circular pattern are the words of Walt Whitman’s poem, ‘Song of Myself’, a poignant rumination on existence, selfhood and humanity #nycaidsmemorial #photography #architecture #aids #nyc #summer #jennyholzer #travel

The memorial was unveiled at a public ceremony on World AIDS Day 2016. In an interview with POZ, memorial cofounder Christopher Tepper stated that once the memorial site was complete, the next phase would be “developing education opportunities and arts programming to really get people to engage.” For the entire interview, read “What’s Next for the NYC AIDS Memorial?” And be sure to check out the ever-growing collection of images on social media, like the ones above from Instagram, by searching #nycaidsmemorial.