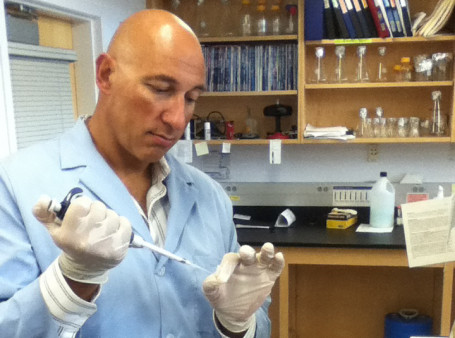 Boosted by a Campbell Foundation grant, an HIV scientist is “exploring new ground” by studying these novel molecules.

When HIV replicates in human cells, it generates circular RNA molecules, the function and precise composition of which remain a mystery. Florida scientist Massimo Caputi, PhD, who discovered these novel molecules, aims to figure out whether they might possibly lead to new HIV treatments.

To help him accomplish just that, The Campbell Foundation awarded a $75,000 grant to Caputi, who is a professor of biomedical science at Florida Atlantic University’s Charles E. Schmidt College of Medicine in Boca Raton. Specifically, the grant will help Caputi determine the molecule’s role in HIV replication and understand how much of the molecule is created and what, exactly, it is made of.

“These molecules have the shape of a closed circle and are derived from the RNA that the virus utilizes to produce the viral proteins,” Caputi explains in a press release from the Campbell Foundation, which funds independent, science-based HIV research. “Understanding how HIV replicates in infected cells and how it can escape the control of the immune system is essential for creating new therapeutic approaches to eradicate HIV.”

Scientists already know that closed circles of RNA are linked to cancers and autoimmune disease, neurological disorders and cardiovascular disease. Researchers also know the molecules can regulate the immune system.

It is hoped that further knowledge about these molecules will yield a better understanding of HIV’s replication process and lead to potential new therapies, including ones that could be useful as HIV continues to mutate and become drug-resistant.

This isn’t Caputi’s first Campbell grant. According to the press release, in 2017, he received a $30,000 fast-track grant to study a cellular protein called SRSF1 that keeps HIV from replicating in T cells. The work Caputi completed thanks to that grant helped him later secure a $448,500 grant from the National Institutes of Health to continue the promising research.

In approving his latest grant, board members of the Fort Lauderdale–based Campbell Foundation called Caputi’s work with the novel RNA molecules “very innovative” and said the research is “exploring new ground” that “will lead to a greater understanding of the biology of HIV and potentially identify additional therapeutic targets.”

To read about other grants from the foundation, see “Long COVID and ‘Gut Leakiness’ in People Who Have HIV,” “Creating an App to Help Caregivers Better Prescribe HIV Meds,” “Exploring New Ways to Prevent HIV and STIs in Women,” “Identifying People With HIV at Higher Risk for Heart Disease and Stroke” and “Can a Single Vaccine Injection Functionally Cure HIV?”