A quest to reinvent the condom, perhaps with bacon flavor. 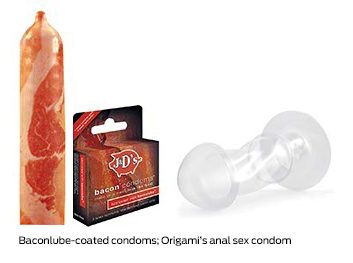 The first latex condoms came out in 1918. Today, with 15 billion units manufactured each year, condoms remain “one of the most ubiquitous and potentially underutilized products on earth,” writes the Bill & Melinda Gates Foundation. It has issued a Grand Challenge to develop the next generation of condom. Winning applicants receive initial grants of $100,000, with follow-on grants of up to $1 million. The challenge brought to mind several recent news items:

•    U.K. designer Ben Pawle came up with a one-handed condom wrapper that makes “donning a ’dom” so simple you can open the wrapper between your finger and thumb—it’s a snap!

•    And finally, out of Seattle, we have J&D’s Bacon Condoms—prophylactics coated in tasty baconlube (which you can buy separately) and colored to “make your meat look like meat.” Nasty pig, indeed.