Meanwhile, new analyses of gonorrhea have raised concern at the CDC about emerging drug resistance.

The United States has seen a steep and continuous rise in annual sexually transmitted infection (STI) diagnoses in recent years, according to the Centers for Disease Control and Prevention (CDC). This trend, along with recent analyses of gonorrhea, has raised concerns about the possible emergence of drug-resistant strains of the infection.

The CDC released preliminary data on 2017 STI rates at the National STD Prevention Conference in Washington, DC, indicating that a record  2.3 million cases of the three main bacterial STIs, chlamydia, gonorrhea and syphilis, were diagnosed. (STD is short for sexually transmitted disease and is synonymous with STI.) This figure was more than 200,000 cases higher than the previous record, set in 2016.

“We are sliding backward,” Jonathan Mermin, MD, MPH, the director of the CDC’s National Center for HIV/AIDS, Viral Hepatitis, STD and TB prevention, said in a press release. “It is evident the systems that identify, treat and ultimately prevent STDs are strained to near-breaking point.”

According to the National Coalition of STD Directors, the purchasing power of the federal budget for tackling STIs has declined by 40 percent since 2003. 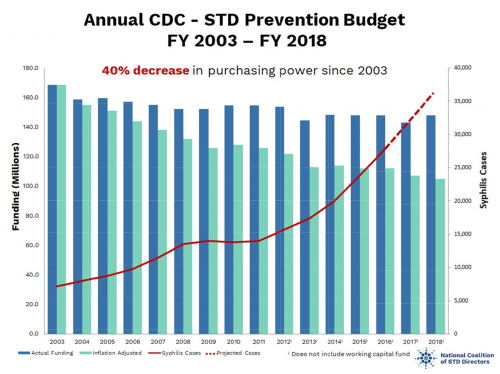 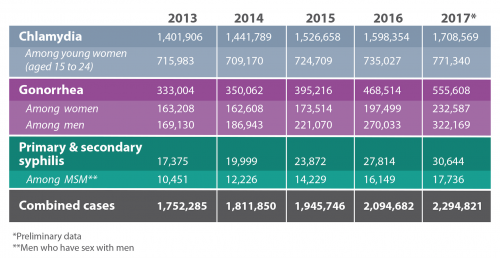 These STIs are treatable with antibiotics. That said, the gonorrhea figures are particularly concerning to CDC officials because of recent warning signs about the possible emergence of drug-resistant strains that may ultimately give rise to cases of the STI that are untreatable.

Gonorrhea has evolved to become resistant to every antibiotic ever used to treat the infection with the exception of ceftriaxone. Since 2015, the CDC has recommended health care providers treat gonorrhea with a single shot of ceftriaxone plus an oral dose of azithromycin, an antibiotic added to help delay the STI’s development of resistance to ceftriaxone. 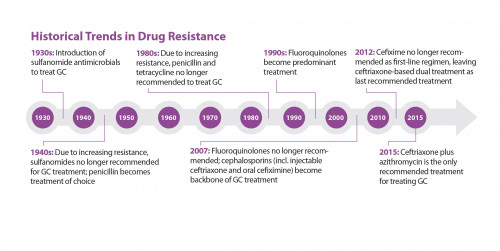 “GC” is shorthand for gonorrhea.Courtesy of CDC

Since the implementation of this new gonorrhea treatment protocol, the United States has seen no emerging resistance to ceftriaxone in the STI. Nor has anyone in the nation failed ceftriaxone-azithromycin therapy for gonorrhea. However, according to new information from the CDC, the proportion of gonorrhea samples that showed emerging resistance to azithromycin rose from 1 percent to 4 percent between 2013 and 2017.

CDC officials are concerned that this trend indicates the possibility that gonorrhea genes harboring resistance to azithromycin could cross over into strains of the STI that have reduced susceptibility to ceftriaxone, a precursor to antibiotic resistance. Such a phenomenon could yield a strain of gonorrhea that does not respond to ceftriaxone.

“We expect gonorrhea will eventually wear down our last highly effective antibiotic, and additional treatment options are urgently needed,” Gail Bolan, MD, director of the CDC’s Division of STD Prevention said in the same press release. “We can’t let our defenses down—we must continue reinforcing efforts to rapidly detect and prevent resistance as long as possible.”

Research into new treatments for gonorrhea is ongoing. However, whether researchers can bring a safe and effective novel treatment for the STI to market before any emergence of untreatable strains remains to be seen.

Note that the man in the United Kingdom who recently contracted gonorrhea with a high-level of resistance to azithromycin and resistance to ceftriaxone was ultimately successfully treated with intravenous administration of the antibiotic ertapenem.

To read a CDC press release on the report, click here.

To read a press release about the report from the National Coalition of STD Directors, click here.