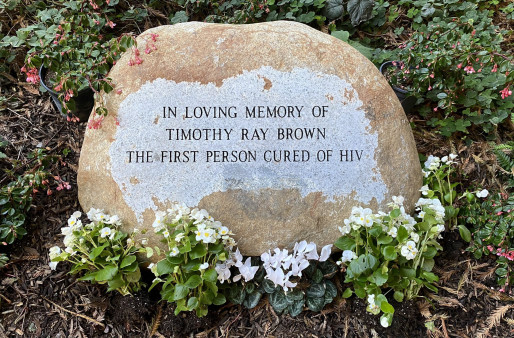 Timothy Ray Brown’s HIV legacy lives on. Famous for being the first person cured of HIV and often referred to as “the Berlin Patient,” Brown died last September at age 54 after a battle with recurring leukemia. This past weekend, a memorial boulder in his honor was unveiled at the National AIDS Memorial Grove in San Francisco’s Golden Gate Park, reports ABC 7 Chicago in a segment you can watch below.

“In Loving Memory of / Timothy Ray Brown / the First Person Cured of HIV,” reads the text engraved in the boulder.

Brown’s partner, Tim Hoeffgen, attended the dedication ceremony. “It’s just a loving tribute to Timothy,” Hoeffgen told ABC 7. “He was a very sweet and kindhearted person who wanted everybody to be cured.”

John Cunningham, CEO of the National AIDS Memorial, spoke at the ceremony. “Forty years into the AIDS crisis none of us thought we’d be standing here today without a cure or a vaccine or anything," he said according to the Bay Area Reporter. “But the reality of it is that’s where we are.” On a note of encouragement, he added, “A memorial is about so much more than the engraved names that are at my feet. A memorial is about the stories behind those names, behind those letters. The rich stories of humanity and love and life and courage and strength and struggle and death.… It’s the story of Timothy Ray Brown that will continue to inspire those in the future.”

Scientists first reported on Brown’s cure in 2008. At the time, he remained anonymous and was referred to as the Berlin Patient. But in a June 2011 POZ cover story, he went public with his identity. After that, Brown used his time in the global spotlight to raise awareness and hope not just about HIV but for research and a cure.

When Brown died last year, an outpouring on social media illustrated how much his life had inspired the HIV community. POZ rounded up a collection of the posts, which you can read in the feature “R.I.P. Timothy Ray Brown.”

The POZ obituary on Brown by science editor Liz Highleyman described his cure history as follows:

An avid traveler, Brown was living in Berlin when he was diagnosed with HIV in 1995. He was on antiretroviral treatment with well-controlled HIV when he was diagnosed with acute myeloid leukemia in 2006, which would require two bone marrow transplants. His hematologist, Gero Hütter, MD, then at the University of Berlin’s Charité Hospital, had the idea to use stem cells from a donor with a rare genetic mutation known as CCR5-delta32 that blocks HIV from entering cells.

Brown underwent intensive chemotherapy and radiation to kill off his cancerous immune cells. He nearly died in the process and was left with lasting complications. But the donor stem cells rebuilt a new immune system that was resistant to the virus.… 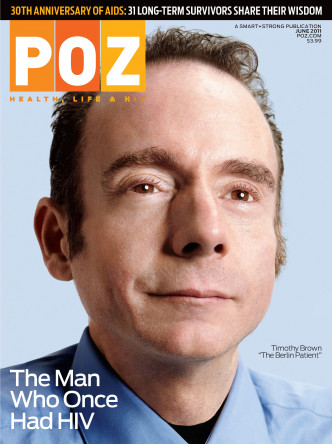 Timothy Ray Brown revealed he was the Berlin Patient in this 2011 POZ cover story.

To help memorialize Brown’s legacy, a group of nonprofits collaborated to raise money for the memorial boulder in Golden Gate Park in addition to a memorial bench in the Wellness Park adjacent to the Desert Regional Medical Center in Palm Springs, California; Brown had been living in Palm Springs when his cancer returned, but he had also lived in San Francisco.

All are welcome to memorialize loved ones or organizations through inscriptions on boulders, crescent-shaped structures and benches throughout the AIDS Memorial Grove. For more details, visit AIDSMemorial.org.

The memorial bench in Palm Springs was unveiled earlier this year. For details, see “First Person Cured of HIV, Who Died Last Year, Is Memorialized [VIDEO].”

Brown isn’t the only person to have been cured of HIV. In 2019, researchers reported on a similar cure case involving an anonymous man. In May 2020, he went public with his identity: 40-year-old Adam Castillejo. For more, read “Meet the 2nd Person Cured of HIV, aka the ‘London Patient.’”

In related news, scientists are getting a better sense of the risks and benefits of treatment interruptions in cure research. To learn more, see “A Closer Look at the Long-Term Impact of HIV Cure Research.” Click #Cure for a collection of related articles on his popular topic.