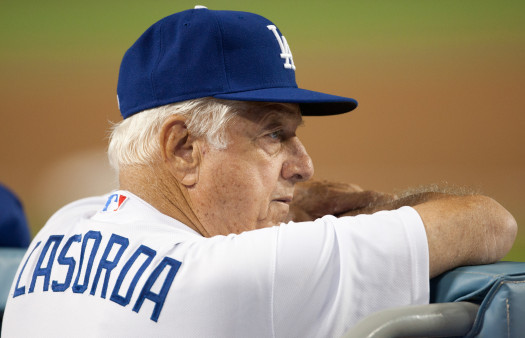 Dodgers manager and baseball legend Tommy Lasorda died Thursday night of a heart attack at age 93. The news brought to mind more than the expected career highlights from his 20 years with the Dodgers, including two World Series championships. For many people, talk of Lasorda’s life revived memories of the icon’s relationship with his son, Tommy Lasorda Jr., who was gay and died of AIDS-related illness. At the time, Lasorda Sr. denied his son’s homosexuality and the true cause of his death.

As the Los Angeles Times obituary on Lasorda Sr. states: “In 1991, Lasorda’s son, Tom Jr., known as Spunky, died at 33, a death attributed to pneumonia and dehydration. Lasorda was enraged when it was widely reported that his son had died of complications of AIDS. Lasorda insisted his son wasn’t gay, though the younger Lasorda’s friends said otherwise.”

LGBTQ journalist Karen Ocamb, who knew Lasorda Jr. from 12-step meetings in West Hollywood and described him as a fashionista, wrote in The Los Angeles Blade last week that his father “was a character worthy of his Hall of Fame status. But he also exemplified the horrendous personal struggle gays and their families faced during the AIDS crisis.” In a post she also included on the Instagram feed @theaidsmemorial, Ocamb wrote: “This, too, must be part of the story—part of Tommy Lasorda’s legacy—that he loved his gay son, was with him as he died of AIDS—but denied him immediately afterwards—only to hurt so much from that denial that he finally apologized, perhaps following the lead of another sports great, HIV-positive Magic Johnson, who also has a gender-fluid son.”

At LGBTQ magazine The Advocate, queer baseball fan John Casey shared memories of learning about the father-son relationship. “I remember when [Lasorda Jr.] died,” Casey wrote. “He was young, and because his father was his father, I did not connect the cause of death with AIDS. I blindly thought the young Lasorda just got tragically sick.” (Casey’s commentary, titled “Tommy Lasorda’s Legacy Includes Silence Over HIV and His Gay Son,” included an interesting sidenote about Lasorda Jr. befriending the first out baseball player, Glenn Burke, an African American who died of AIDS-related illness in 1995 at age 41 and is credited with popularizing the high five.)

In 1992, GQ published a lengthy and nuanced profile by Peter Richmond of the father-son duo, including many anecdotes by Lasorda Jr.’s friends and sports figures who knew both men. The article, reprinted in 2013 on Deadspin as “The Brief Life and Complicated Death of Tommy Lasorda’s Gay Son,” depicted the complicated yet loving relationship between the two men. The younger Lasorda, extremely likable and unapologetically effeminate, was a regular presence in the Los Angeles gay party scene who also enjoyed attending baseball games and trainings with his father but who seemed to claim in later years that he had changed from being gay, or at last no longer used that label. Lasorda Sr., Richmond wrote, grieved his loss in his own way, including by not bringing his sadness into his Dodgers world, where his job was to energize and inspire.

A postscript by the author noted, “Expecting the father to ask that donations [in honor of his son] go to the Gay Men’s Health Crisis? That would have been too much. But what if Tommy Sr., one of the most highly visible men in all of professional sports in those days, had simply acknowledged his son’s sexuality and his cause of death? It could have saved more lives than we can ever know.”

For other glimpses at HIV history in the early days of the epidemic, see the recent articles “R.I.P. Leanza Cornett, Miss America ’93 and Trailblazing AIDS Activist,” “Red Hot Reissues of AIDS Benefit Albums From the 1990s” and “The HIV Story Behind ‘Beauty and the Beast’ and Other Disney Classics” or click #AIDS History.

POZ Poll: How interested are you in AIDS history?