The open-label follow-up to a previous placebo-controlled study of an HIV-preventing ring is seeing high use among women.

The open-label trial of an antiretroviral (ARV)-infused vaginal ring has shown considerable promise in reducing the risk of HIV among a large group of women in sub-Saharan Africa. The women appeared to use the monthly ring at a high rate, and, according to an interim analysis of the ongoing trial, they have contracted HIV at a rate about half that of what would be expected according to mathematical modeling.

Jared Baeten, MD, PhD, a professor of global health, medicine and epidemiology at the University of Washington, presented findings from the Phase IIIb HOPE study, also known as MTN-025, at the 2018 Conference on Retroviruses and Opportunistic Infections (CROI) in Boston. Final results from the trial should come next year. 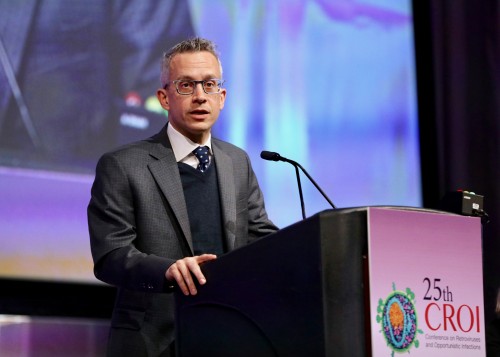 The HOPE study followed the ASPIRE clinical trial, in which female participants were randomized to receive a monthly vaginal ring infused with the ARV dapivirine or a placebo ring.  In the ASPIRE trial, the dapivirine ring was associated with a 27 percent reduced risk of contracting HIV among the overall group of female participants. Women who used the ARV-infused ring most or all of the time experienced a reduced HIV risk of at least 56 percent. Baeten presented findings from that study at the 2016 CROI, also held in Boston.

Meanwhile, a study called DREAM, also presented at CROI, had a similar design to HOPE and yielded similar findings, with about a 50 percent estimated reduction in the HIV acquisition rate among its female participants.

“The data are amazingly comparable” between HOPE and DREAM, remarked Zeda Rosenberg, ScD, of the International Partnership for Microbicides in Silver Springs, Maryland, who presented findings from the latter study.

According to a planned interim analysis of the HOPE trial conducted in October 2017, by that point, the study had enrolled 1,407 HIV-negative women, all of whom had participated in the ASPIRE trial (this amounted to 57 percent of the women who remained HIV negative at the end of ASPIRE). The HOPE participants were engaged at 14 of the ASPIRE study sites in Malawi, South Africa, Uganda and Zimbabwe.

Because all the women in HOPE already had experience in a previous vaginal ring trial, it is possible that their ring-using behaviors have been skewed such that the results of this trial do not provide the best prediction of how real-world use of the HIV prevention product will play out.

The HOPE participants have been offered the dapivirine ring on an open-label basis, meaning they all know they are receiving a ring containing active drug and not a placebo. They are instructed to insert the ring into their vagina and leave it in place for one month before replacing it with a new one. Participants make study visits monthly for the first three months and then every three months. They can receive up to 12 consecutive months of rings.

HOPE is allowing women to participate in the study whether or not they choose to use the monthly ring, which will hopefully provide the researchers a way to analyze the ring’s appeal, or lack thereof, among women.

A total of 1,299 (92 percent) of the HOPE enrollees included in the interim analysis opted to use the ring.

To measure adherence, the study investigators tested residual dapivirine levels in the rings the women returned at their study visits (if the drug had seeped out to a certain point, this indicated that the ring had been used). They are also conducting blood tests to measure adherence, although the results of those assays were not included in this interim analysis.

During a cumulative 616 years of follow-up, 12 women tested positive for HIV, for a rate of 1.9 percent per year. According to the study authors’ mathematical modeling, which was based on the women’s location, age and STI infection rate, the expected rate of HIV acquisitions among them was 4.1 percent per year.

While a 50 percent reduction is by no means a perfect population-level effect, it is within the ballpark of the overall efficacy of initial studies of two major HIV prevention interventions. In the 2010 iPrEx study that first proved the effectiveness of Truvada (tenofovir disoproxil fumarate/emtricitabine) as pre-exposure prophylaxis among men who have sex with men (MSM), PrEP reduced the overall HIV rate among the participants by 44 percent. A subsequent open-label extension study of iPrEX saw an estimated reduction in participants’ HIV diagnosis rate of about 50 percent. Additionally, three major randomized controlled trials published in the mid-2000s found that voluntary medical male circumcision (VMMC) reduced female-to-male HIV transmission by about 60 percent.

Public health officials have made a concerted effort to roll out VMMC among men in sub-Saharan Africa, and PrEP is gradually becoming a pillar of HIV prevention in various nations, led by the United States. As the monthly vaginal ring stands poised for regulatory approval, it could become yet another important tool for reducing the spread of the virus among women, in particular those in hard-hit sub-Saharan Africa.