Donja R. Love is an Afro-queer playwright, poet and filmmaker from Philadelphia who is living with HIV. He is the author of the play one in two, about surviving and thriving as a gay Black man with the virus.

Trained at The Juilliard School, he is the recipient of the 2021 Terrence McNally Award, 2020 POZ Award for Best Play, 2018 Laurents/Hatcher Foundation Award and the 2017 Princess Grace Playwriting Award. His work has been developed at the Manhattan Theatre Club, the Rising Circle Theater Collective, The Lark and The Playwrights Realm. 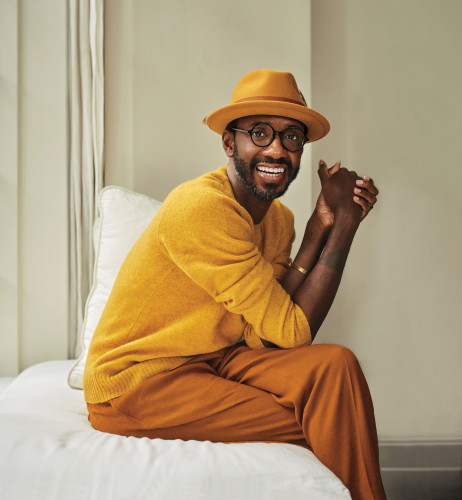 Love is a cofounder of The Each-Other Project, a digital media platform that celebrates and fosters community through art and activism for Black queer and trans communities. In 2020, he launched a writing program titled Write It Out! (WIO!), specifically for people living with HIV. In 2021, with sponsorship from Billy Porter and GLAAD, he launched the WIO! Prize for playwrights living with HIV.

Why did you write one in two?

For me and me alone. I wrote it on the Notes app on my phone in 2018. For background, I publicly shared in 2016 that I’m living with HIV, posting on Facebook and Twitter. Before that, only very close folks knew, like my parents and my husband. I didn’t want to talk about it. But I got to a point where I needed liberation, and to me, that was sharing my status on social media.

The time prior to that when I felt like I was in a liberated space was December 13, 2013. That’s when Beyoncé released her self-titled album. All I focused on was her album. I didn’t think about my status on that day. I was just living my life at that time, thanks to Beyoncé.

Fast-forward to December 2018. I started to feel depressed again. I knew it was related to my status, even though at that point I had been open about it for two years. I stayed in bed, but I didn’t want to feel that way. I said, What can I do? I told myself, You can write about how you’re feeling right now.

A few weeks after I finished writing the play, someone reaches out to me asking if I could meet up with a friend of theirs. They said this friend was recently diagnosed with HIV, and they aren’t taking their diagnosis well. They said that this person is drinking excessively, throwing themselves into risky sexual behavior and had become a shell of themselves.

I dropped everything I had that evening so I could meet up with this person. We went to a restaurant. I could see the hurt in their eyes. I get emotional just thinking about it. I was the first person he had talked to who was also HIV positive. At that point, I had been living with HIV for 10 years. Sharing where I was in my journey, I could see it gave him so much hope.

After we parted ways, as I was walking to the train, I immediately thought to myself, Do that play on your phone, Donja. That is not just about you. You cannot keep that to yourself. I reached out to my agent when I got home. Only a year passed from when I wrote it to when it was onstage.

The play was called one in every, but we landed on the title one in two, which refers to the statistic that one in two gay or bisexual Black men are projected to test HIV positive in their lifetime. When people hear the title and what it stems from, they are shocked. People always ask, without fail, “How did I never know this?” And that is the question.

That means, by and large, as a society, we do not care. That’s why you don’t know, and I’m hoping that my work can help shift that. My biggest hope is that one day theaters won’t produce the play because it is so outdated.

You are very intentional about who you’re writing for. It reminded me of when David Drake wrote The Night Larry Kramer Kissed Me, and I produced it off-Broadway. There was a concern about pigeonholing it as a gay play or an AIDS play. One night, David and I were sitting at a diner going over all this, and we realized that’s exactly how we wanted it marketed. Great if other people saw it, but we wanted our peers to see it.

When I’m working with a theater, the first people I email are from the marketing team. They get the standard salutations, but I make sure to give them the inspiration behind the work, who the work is for, a list of organizations aligned with the community and strategies on how we can best mobilize.

The multitude of folks who work in these spaces don’t look like me, don’t look like the characters who I write about, so naturally there is a cultural disconnect, even when folks are informed. For me and so many other writers who look like me, we have to do more than just be writers.

As this relates to one in two, I told marketing I wanted people coming to the play and then finding out what it’s about, not first thinking that it’s going to be so sad...

Avoiding their fear of being diagnosed with HIV while going to see an AIDS play.

I didn’t want that. Especially since, to date, one in two is one of my funniest plays. I wanted people to laugh and then go, “Oh, fuck, right.” It made it very challenging to figure out a way to market this play without talking about this thing.

The theater struggled at first and came back to me to convince me to market the play as a conversation about HIV. I had to have a conversation with myself. What ended up making me change my mind was I reached out to people, specifically to other Black people living with HIV. Everyone who I asked emphasized how we do not get work that holds space for us in this way.

Are there writers you are inspired by?

Someone who means so much to me is Joseph Beam. Him being from Philly, that’s already a connection. He could have just written a memoir, but his anthology In the Life brought the community together. He saw there was a void in queer Black voices.

I also find myself constantly thinking about what he says in the introduction for In the Life, which is “Visibility is survival.” It literally is. I also think visibility is community.

Tell us about the Write It Out! Program for people living with HIV.

It’s one of the greatest joys in my life right now. Like Joseph Beam, who realized that he had resources for community, I realized I was in a similar space. I reached out to organizations such as Broadway Cares/Equity Fights AIDS (BC/EFA), the National Queer Theater, The Lark, Mobilizing Our Brothers Initiative (MOBI). They helped in different capacities.

My connection with BC/EFA started through one in two. I met with Tom Viola, BC/EFA’s executive director, to see if they could subsidize tickets, which they did. A few months later, we reached out again to BC/EFA for financial support for Write It Out!, and again it was yes.

National Queer Theater provides the administrative side of things, from community engagement to the application and selection process, to the actual classes, to the presentation. MOBI works specifically on the engagement process. The Lark has a long list of actors, directors and stage managers, so they came onboard on the rehearsal process and the presentation.

Last year, we had 13 writers. One unfortunately had to drop out because of illness, so we had 12 at the end of it. This year, we have 10 writers for a 10-week program. They participate online via Zoom. As far as I can see right now, we’ll remain virtual because of the accessibility. Last year, 10 of the 12 writers were not based in New York.

Each writer who participates has their work rehearsed and noticed. It gets presented virtually on World AIDS Day. 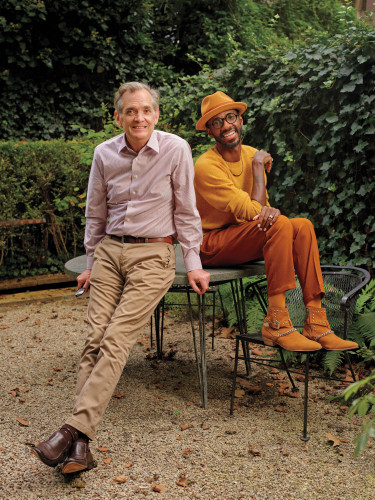 That’s a connection I never thought of, but I do remember being embarrassed about my stutter. I knew I was a boy who liked boys, so I had that in my mind. That was one thing I had to keep to myself. And then talking was something else to add to the list of things to be embarrassed by. Both things were out of my control, so how could I navigate this?

I didn’t want to be made fun of, so it kept me silent. Now, I’m seeing the thread with HIV, being silent about my status as well. It’s just this overall thread of shame. I didn’t want to talk about it. So I wrote about it. Having a stutter put me on that path without even realizing it. I still stutter when I feel extreme emotion. I just have to give you your flowers because I never put these things together until now.

My family had communitarian and engaged values, attended church but not a strong church community. I’m the oldest of four siblings. I have a big family. And when I think about families, I think about aunties, grandmoms and all the individuals who help raise the kids. These are the individuals who are a part of the community and holding so much space. My family was very much a model of that. All I saw was community because it was just every day for me.