Syphilis is a sexually transmitted infection caused by Treponemapallidum bacteria. Since 1996, rates of syphilis have increased in the United States, notably among men who have sex with other men. Untreated infection can cause disease over a course of several years. Although it can be cured with antibiotics, people can get re-infected.

In the early stages of disease, syphilis causes disease of the genitals, mucous membranes and skin. If it is not treated, syphilis can lead to serious complications and death. These include heart problems; neurological problems and dementia, known as neurosyphilis; and infection in the eye that can cause visual impairment or blindness, known as ocular syphilis.

Studies suggest that people with HIV who become infected with syphilis may be more likely to develop lesions and may have a faster progression of disease. Their CD4 counts may drop and HIV levels rise temporarily during early syphilis, but then improve after being treated.

Syphilis has four stages: primary, secondary, latent and tertiary. Symptoms depend on the stage of disease. Transmission is more likely to occur during the primary and secondary stages.

Primary syphilis: In most cases, primary syphilis appears as a painless sore (chancre) that develops within 2–6 weeks after infection. The sore usually develops on the penis, vulva, vagina or anus, but it can also be found on the cervix, tongue, lips, and other parts of the body. The sore usually heals within a few weeks without treatment, but the person remains infected. Sometimes more than one sore is present or sores may not be present.

HIV is much easier to transmit when these sores are present. Someone who is living with HIV and has a syphilis sore is more likely to transmit his or her HIV. Similarly, HIV-negative people who have a syphilis sore are at a higher risk of becoming infected with HIV if they have condomless sex with someone who has HIV.

Secondary syphilis: The most common symptom is an outbreak of small, pox-like skin lesions—usually brownish-pink in color—that seem like a non-itchy rash when clustered together. They can appear anywhere on the body, but they appear more often on the palms of the hands and soles of the feet.

These lesions are highly contagious. They can spread the bacteria if the skin is broken and another person touches them. They can also take several weeks or months to heal, and possibly recur, without treatment.

Secondary syphilis can occur months to years after primary syphilis, and can last two years or more. Other possible symptoms include swollen lymph nodes, fever, fatigue, headache, soreness and aching.

Latent syphilis: Latent (hidden) syphilis is diagnosed when a person has antibodies to T. pallidum but doesn’t have symptoms of the infection. Even though someone with latent syphilis is unlikely to transmit the bacteria to others, treatment is recommended to prevent serious late-stage complications.

Tertiary syphilis: If primary, secondary or latent syphilis is not treated, the bacteria can spread and damage any organ system, including the brain, nerves, eyes, heart, blood vessels, liver, bones and joints. This can lead to various serious health problems, including stroke, paralysis, aneurysms, and heart disease.

Neurosyphilis: This occurs when the bacteria infect the brain or spinal cord, which can occur during any syphilis stage. Serious neurological damage, including paralysis, numbness, gradual blindness and deafness are very possible, and it can be serious enough to cause permanent disability or death. Studies have found that people with HIV who also have T. pallidum are more likely to develop neurosyphilis, even during earlier stages of infection.

How is syphilis diagnosed?

Syphilis is known as the “great imitator.” This is because many of its symptoms are the same as other diseases. In turn, lab tests are needed to diagnose syphilis. There is some evidence to suggest that tests for syphilis are not as reliable in people with HIV.

There are two ways to diagnose syphilis. A blood sample is usually taken for diagnosis, but if you have a sore (primary syphilis) or pox-like lesions (secondary syphilis), your doctor can swab the lesion(s) and send the sample to a lab for diagnosis. However, it can take up to 3 months for antibodies to appear, so you may have to repeat the test to confirm you have syphilis.

How is syphilis treated?

Syphilis can be treated at any stage of infection, though treating it sooner will reduce risk of transmission. Injections of penicillin are the most effective treatment. In fact, it cures syphilis. The amount of penicillin used depends on the stage of infection. For people who are allergic to the drug, it is recommended that they undergo penicillin desensitization.

Primary and secondary syphilis: For anyone with syphilis, one injection of penicillin is all that’s usually needed. However, closer follow-up and additional injections may be needed for people with HIV especially for those with lower CD4 counts. In either case, follow-up blood tests should be done to make sure treatment successfully cured the syphilis. Although they haven’t been well studied, other antibiotics may be used, and close follow-up should accompany those regimens.

Tertiary syphilis: All people should receive one injection every week for three weeks. They should also be examined for signs and symptoms of neurosyphilis to determine if more intensified treatment is needed.

Penicillin injections are given into the butt muscle. Your butt may feel sore for several days after each injection because of the large amount of fluid that was injected. If you are allergic to penicillin, tell your doctor before the injection. Other antibiotics can be given if you are allergic to penicillin. Due to a higher rate of first-line treatment failures among pregnant women, some doctors recommend that they receive a second injection one week after the first.

Some people become ill after getting their first injection. This is because of the “Jarisch-Herxheimer reaction,” named after a German doctor who first noted it in 1895. Because penicillin injections act quickly against the syphilis bacterium, it can cause the bacteria to release high levels of toxins as they die. This can cause symptoms, such as high fever, profuse sweating, night sweats, nausea, and vomiting. These usually end within a few hours of the injection, and can often be managed with aspirin, NSAIDs (non-steroidal anti-inflammatory drugs), Benadryl, pain medication, muscle relaxers, or others remedies. Talk with your doctor or a nurse about your options.

Can syphilis be prevented?

Syphilis can be cured if it is caught and treated during its earliest stages. If you notice unusual sores in or around your genitals, or think you may have had sex with someone who has syphilis, talk with your health provider about getting tested. If you are sexually active, consider getting tested regularly—it’s a simple blood test. If you know you’ve had sex with someone with syphilis at any stage, your doctor may treat it anyway before getting test results.

If you would like to find out if you are eligible for any clinical trials involving new treatments for syphilis, visit ClinicalTrials.gov, a site run by the U.S. National Institutes of Health. The site has information about all HIV-related clinical studies in the United States. For more info, you can call their toll-free number at 1-800-HIV-0440 (1-800-448-0440) or email contactus@aidsinfo.nih.gov. 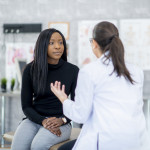