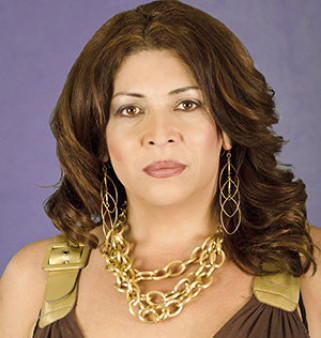 Together with the Robert Wood Johnson Foundation, AIDS United is celebrating people who are making health equity a reality in their community and bringing us closer to ending the HIV epidemic in this country. We are proud to announce that the recipient of the 2019 Robert Wood Johnson Foundation Award for Health Equity, presented by AIDS United, is Arianna Inurritegui-Lint!

Arianna Inurritegui-Lint is originally from Peru and came to the United States as a refugee after her activism and policy work on transgender and HIV issues led to threats against her life. She has been working for the Florida Health Department in the field of HIV/AIDS since 2006. As a transgender woman, she has seen firsthand how her own community has been impacted by this life altering disease. Since then, she has dedicated her time to educating, mentoring, and advocating for people in her community.

Arianna is the CEO and founder of Arianna’s Center, which employs an integrated case management model to provide a comprehensive set of services tailored to individual needs. Clients identify their priorities and share their life experience in an initial intake; counselors gain an understanding of each client’s needs and priorities in areas such as immigration, HIV risk, incarceration, and domestic violence. Since August 2015, Arianna’s Center has completed hundreds of name changes, helped over a hundred individuals access hormone replacement therapy, and supported high-risk HIV-negative populations in accessing PrEP through patient assistance programs, in addition to assisting dozens of transgender people receive their GEDs and enroll in English Second Language classes. Overall, Arianna’s Center helps change the lives of over 500 transgender people every year.

Reflecting on Arianna’s work, Shannon Wyss writes “I first met Arianna in 2017 when AIDS United awarded Arianna’s Center one of our first Transgender Leadership Initiative grants. The value of her work and her deep passion were clear to everyone on the review committee. And they became even clearer as her work on her funded project progressed. Since then, I have stayed connected with her by email, phone, and Facebook and have presented alongside her at several national conferences. Arianna always impresses me with her dedication to trans communities in South Florida, especially the Latinx community. No one gets between her and her clients. I am fortunate to know her—but I’m not nearly as fortunate as the folks in her community who benefit directly from her work. Arianna, this award is very richly deserved.”

Congratulations, Arianna, and thank you for all you do!

What inspired you to begin Arianna’s Center?

As an immigrant transgender Latina woman who is living openly with HIV, I’ve experienced firsthand the stigma, discrimination and challenges that transgender women of color face. When I came to South Florida, I knew that I wanted to work to empower and support my community by addressing the alarmingly high rates of HIV not just through testing and linkage to care but through comprehensive case management that addresses the many challenges faced by the transgender community. That’s why at Arianna’s Center our programming includes name change services, G.E.D. and E.S.L. enrollment, employment support, emergency safe housing and regular trainings and support groups. I just want to give my community the tools they need to live their best lives.

Who have been your biggest supporters since founding Arianna’s Center?

I’ve been fortunate to have many people support me personally and professionally since starting Arianna’s Center. Without a doubt my mentors Bamby Salcedo, Cecilia Chung and special my dear Ruby Corado the founder of Casa Ruby in Washington D.C. has been one of my biggest inspirations and supporters. It’s so important for us to have example of strong trans women in leadership. Natalia Pabon on my team has also been a constant source of inspiration and support. I’ve also been very fortunate to build a great relationship with AIDS United who have really recognized the needs of people living with HIV in the South Eastern United States and are committed to supporting our work.

What are you most proud of in your work?

Without hesitation I would say the personal stories of success and empowerment. Because we are an organization that is heavily focused on direct services, we have a very close relationship to our clients and so we’re really by their sides as we navigate with them their health care, housing, employment and education. To know that we play a role in helping to improve their lives and seeing many of our clients in turn become peer navigators is incredibly rewarding.

What changes do you hope to see in the next 10 years as we work to end the HIV epidemic?

Aside from reducing the ongoing stigma that exists around people living with HIV, I’d like to see a greater understanding of the need for more programming to address the particular barriers that exist in my community (transgender women of color) to accessing testing and then linkage to care. The disproportionately high numbers of transgender women of color being diagnosed with HIV shows that traditional methods of testing and prevention aren’t necessarily effective in all communities and so we need to take a more individual approach. At Arianna’s Center, we recognize that accessing health care can be a daunting and traumatic experience for transgender individuals, and that is why we introduced The Diana Project. Through The Diana Project we visit one on one with clients to administer HIV testing wherever they need us, be it in their homes, their workplace, homeless shelters or on the streets. The service is provided by transgender peer navigators to build trust with the client and includes linkage to care and prevention and ongoing case management.

Reflecting on all you have learned since you began this work, what advice would you give to your younger self?

We can’t do this work without allies and they can come from what sometimes seems like the most unlikely of places, so keep an open mind!

I want people to invest in empowering the transgender community, put us into positions of leadership and give us a seat at the decision-making table. Use and compensate our expertise, because at the need of the day we are the ones best equipped to share our stories and communicate our needs. I would like to have more conversation about U=U and more work with ICE detention centers around the nation also.

[Editor’note: Arianna was honored in the 2019 POZ 100, which celebrated transgender, gender-nonconforming and nonbinary HIV advocates. She was also profiled in the POZ Heroes column.]