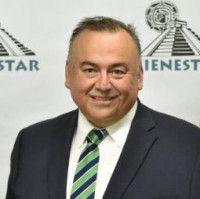 Oscar De La O is a founding member of Bienestar Human Services, the largest Latino HIV organization in the country. After three decades as president and CEO and following a diagnosis of pulmonary fibrosis, Oscar stepped down to provide opportunities for new leaders and currently serves as Bienestar’s vice president. He has spent the last 38 years as an advocate for Latinos and other underserved communities impacted by HIV and AIDS. Since 1989, Bienestar (“well-being” in Spanish) has grown from hosting weekend meetings in Southern California to providing in-depth programs at nine locations that offer HIV treatment and prevention, comprehensive social services, full-service medical care, substance use counseling and mental and sexual health education for the Latino community. Oscar previously served on the board of NMAC and continues his involvement with other social justice organizations addressing equality for underserved communities. Oscar’s mother taught him that to live a meaningful life, one must create positive change in other people’s lives, and that’s exactly what he’s done. 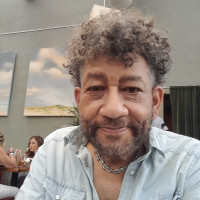 In 2020, longtime HIV and Latino rights activist Jose de Marco founded Black and Latinx Community Control, an intergenerational group of LGBTQ+ people of color negatively impacted by health systems built on racism, oppression and bias. The group’s mission is to end HIV and regain control of health care in Black, Indigenous and people of color communities. In 2012, Jose won the David Acosta Revolutionary Leader Award. He has been a member of AIDS Policy Project, Health Global Access Project and ACT UP Philadelphia. He’s also a former board member of Galaei and the founder of Proyecto SOL, a leadership organization for Latinos living with AIDS. He advocated for funding for Philadelphia FIGHT’s Project TEACH (Treatment Education Activists Combating HIV) Latino, which offers classes for Spanish speakers living with HIV. He’s currently organizing for overdose prevention centers to combat overdose deaths and spiking HIV infections in those who inject drugs. 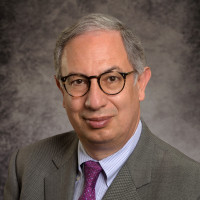 A native of Mexico, Carlos del Rio, MD, completed his residency at Emory University. He served as the executive director of the National AIDS Council of Mexico from 1992 to 1996, before returning to Emory to focus on patient care, teaching and research. He is currently a distinguished professor of medicine in the Division of Infectious Diseases at Emory University School of Medicine, executive associate dean for Emory School of Medicine at Grady Memorial Hospital, professor of global health in the Department of Global Health and professor of epidemiology at the Rollins School of Public Health. Carlos is also codirector of the Emory Center for AIDS Research and co–principal investigator of the Emory–Centers for Disease Control and Prevention (CDC) HIV Clinical Trials Unit and the Emory Vaccine and Treatment Evaluation Unit. At the start of the COVID-19 pandemic, he advised municipal, state and national leaders on their response to the novel coronavirus and helped develop safety strategies for the Atlanta Opera and Tyler Perry Studios. 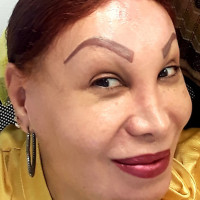 Brenda del Río González is a transgender woman originally from Michoacán, Mexico, who has been living with HIV for the last 27 years. Brenda has been combating prejudice and fighting HIV in the Los Angeles transgender community since the 1990s. In her current role as the program manager at Bienestar Human Services, she works closely with trans clients to empower them to create positive change in their lives and offers them social and health services. She also leads Transgender United, a Spanish-language support group for transgender women in Long Beach. 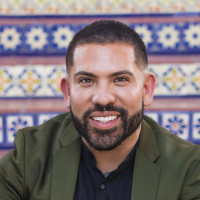 Elias Diaz wears many hats in his hometown hamlet of Eagle Pass, Texas. He is the cofounder of Eagle Pass SAFE, an LGBTQ nonprofit serving the rural communities along the Texas-Mexico border, as well as a member of the Eagle Pass City Council. He is a mental health clinician for the Maverick County Hospital District, and he created the Sexual Health Project to address the gaps in care for people in the community living with HIV. And he even teaches spinning at a local gym! Elias is valiantly stepping up to battle each of the challenges—immigration, homophobia, stigma, lack of funding and more—that HIV and LGBTQ communities in small rural towns like Eagle Pass face. 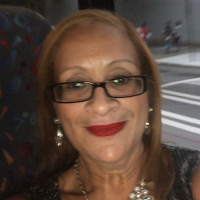 Yolanda Diaz has been advocating for women living with HIV for more than 30 years. She is a founding member of the New York City chapter of Positive Women’s Network–USA (PWN-USA). For eight years, she worked with SMART (Sisterhood Mobilized for AIDS/HIV Research & Treatment) University, helping women access HIV treatment and other services. She is on the steering committees of LatinX+, a network of Latinx people living with HIV, and the U.S. PLHIV Caucus, which speaks collectively for HIV-positive people in the United States. As a health educator at Iris House—the longtime New York City nonprofit for women living with or at risk of acquiring HIV—Yolanda helps women navigate HIV services. Living with HIV since 1980, she recently joined NMAC’s 50+ Strong & Healthy program. 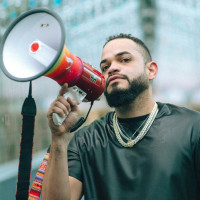 Carlos X. Díaz Rodríguez, a community organizer and artist, started working for QLatinx as an HIV testing counselor after his cousin was shot at the gay nightclub Pulse; he now leads QLatinx’s HIV justice program. He also runs ¡Hablando Alto! (Spanish for “speaking loudly!”), the organization’s capacity-building and skill development program for those seeking to address the HIV epidemic in their local communities. He’s also the president of Central Florida’s Latino Outreach and Understanding Division (LOUD). He received the Central Florida HIV Planning Committee’s Unseen Hero Award in 2018 and was named the official artist of the United States Conference on AIDS in 2018. Carlos uses his art to empower disadvantaged communities. 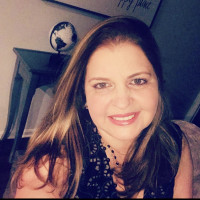 Aleida Espinal Fernández is the North Carolina community organizer for Latinos in the South, a program created by the Latino Commission on AIDS to address barriers to HIV care in the region. Originally from the Dominican Republic, Aleida has more than 14 years of experience working in HIV outreach, prevention and education as a Ryan White medical case manager at Carolinas Care Partnership and RAIN. Her community-building efforts for Latinos in the South will support better access to care and access to pre- and post-exposure prophylaxis (PrEP and PEP) for Latinas as well as Medicaid expansion. 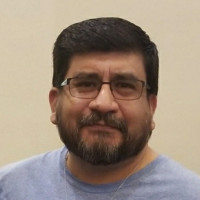 Caesar Espinoza is proud of his work as a volunteer facilitator, advocate and peer navigator for Dignity Health, where he runs workshops such as the Positive Self-Management Program, the Chronic Disease Self-Management Program and the Diabetes Self-Management Program. He was also recently certified as an HIV tester. Caesar helps those living with HIV and other chronic diseases work through red tape so that they can receive the best-quality health care. He was recently elected to the Clark County Ryan White Part A Planning Council and is an active member of Nevada’s Advisory Task Force on HIV Exposure Modernization, which aims to reform outdated Nevada laws that criminalize and stigmatize people living with HIV. 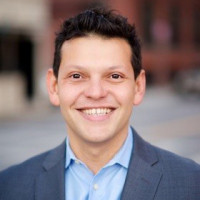 Iván Espinoza-Madrigal is the executive director of Boston’s Lawyers for Civil Rights, one of the largest and oldest organizations in New England working on legal and policy issues at the intersection of racial justice, immigration, public health and entrepreneurship. Ivan is best known for his work on these topics as well as education, housing, voting and LGBTQ rights. The group filed the first lawsuit against Florida Governor Ron DeSantis alleging that he violated migrants’ constitutional rights by fraudulently inducing Venezuelan asylum seekers to fly from San Antonio to Martha’s Vineyard, Massachusetts. His organization recently championed a major discrimination case on behalf of a cadet living with HIV against the U.S. military. An expert in legal protections for people of color and immigrants, he previously worked for Lambda Legal on marriage equality cases and with LGBTQ people of color. He also served as the legal director for the Center for HIV Law and Policy. 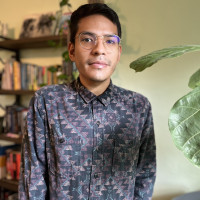 Edric Figueroa is a first-generation queer Peruvian American who was born in New York and raised in Georgia. He spent six years in Seattle working with LGBTQ survivors of violence and LGBTQ youth as well as with families. These days, Edric lives in Atlanta, where, as the director of the Zero Campaign for the Latino Commission on AIDS, he coordinates annual awareness campaigns to fight homophobia and transphobia. He’s also a volunteer HIV testing counselor and board member for Latino LinQ. Edric previously served as the coalition coordinator for Act Now: End AIDS, a national coalition committed to ending the HIV epidemic in the United States. He wrote an essay about how growing up in the South with an abstinence-only education sparked a passion for HIV prevention and LGBTQ health that appeared in the anthology Between Certain Death and a Possible Future: Queer Writing on Growing Up with the AIDS Crisis. 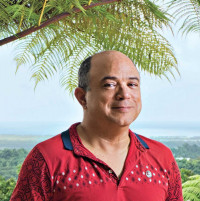 A long-term HIV survivor, Brooklyn-born Anselmo Fonseca has been involved in HIV activism for over 20 years, focusing on the needs of the people of Puerto Rico and the challenges they face, such as stigma, discrimination and the complexities of the island’s health care system. He serves as the Ryan White Part B Community cochair, cofounder and facilitator of the Coalition Cero HIV PR (supported by AIDS United), AIDS United’s program manager in Puerto Rico and the Puerto Rico Undetectable Equals Untransmittable (U=U) ambassador for the Prevention Access Campaign. In 2010, he was named one of the 350 most influential national advocates by the Obama administration. 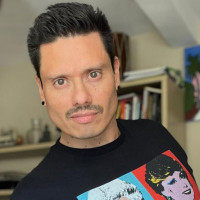 After receiving his HIV diagnosis, Julio J. Fonseca felt compelled to work as an HIV advocate. Today, he is the senior program manager for AIDS United, a position to which he brings 25 years of experience in advocacy, coalition development, capacity building and community outreach. As the leader of the Conexiones Positivas/Positive Connections, Partnering and Communicating Together initiative and the People Organizing Positively project, he focuses directly on supporting people impacted by HIV. He also leads the Puerto Rico–based projects for the organization. Julio volunteers as a mentor for people who are newly diagnosed with HIV at Whitman-Walker Health and previously worked with Mental Health America and the HIV Medicine Association. 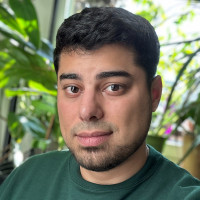 A guiding light in the HIV community, Mikey Forbes has been working in HIV prevention since they were in their teens. For the past five years, they have been the prevention program manager at the social service agency Chicago House. Their work focuses on the Black and Latino communities and centers on harm reduction, neurodiversity and trauma-informed care. They also often work with the LGBTQ community, sex workers and people who inject drugs. Mikey advocated relentlessly for the acquisition of a new mobile HIV testing unit, which has been a vital asset during the COVID-19 pandemic. They also facilitate quarterly HIV testing trainings for public health apprentices. 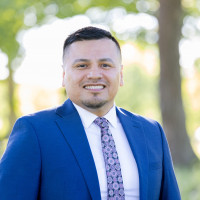 Moncies Franco Sr. is an advocate for people living with HIV as well as individuals impacted by the criminal justice system. He’s a project coordinator for the Health, Homelessness, and Criminal Justice Lab, which conducts research with a focus on improving the health of people experiencing homelessness or incarceration. He also serves on the board of directors of the Aliveness Project, is a U=U ambassador and has been a part of the “End HIV MN” campaign since 2020. Moncies uses his lived experience to educate, spread awareness and empower others to lead self-directed lives. He’s committed to reducing stigma and eliminating barriers to health for marginalized communities.