James Houston is a leading fashion photographer from Australia who now lives in the United States. He has worked with major corporate and celebrity clients and had his photographs published in four books.

In 2006, he launched Move, a gorgeous coffee-table book featuring photos of nude dancers, to raise awareness and funds to fight HIV/AIDS. The book was the cornerstone of his Move for AIDS initiative, which included exhibitions of the images from the book and performances by the dancers themselves. The project raised about half a million dollars. 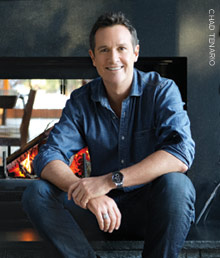 While doing research for Move for AIDS, Houston was struck by the impact HIV and other sexually transmitted infections were having on teenagers. In response, he directed his first feature-length documentary Let’s Talk About Sex. Its focus? The protection of teenage sexual health. The film aired nationwide in 2011.

Why did you make a film about teen sex?
[While making Move, I learned a few things about what young people know—and don’t know—about sex, and that] really inspired me to do something bigger. Not only did the HIV/AIDS rates for youth rear their ugly head to me, but also the rates of [unplanned] pregnancy and other sexually transmitted infections.

When I would share those statistics with people, they couldn’t believe them. To help change what was happening, I had to bring the [statistics] to life. So I raised money to make a film [exploring the sexual health crises among teenagers] through real characters and real stories.

Some say the more we talk to kids about sex, the more likely they are to have it…
One of the biggest myths you find in [America] is that education or communication about sex is what causes kids to have sex. [It’s not] like they hadn’t thought about it until someone mentioned it. Young people are having sex, are getting diseases, are becoming [unintentionally] pregnant [all because] we are not empowering them with the information they need [to avoid these things].

Teenagers are curious. They are going to get the information. Any parent who thinks they are blocking their kid from information needs to pull their head out of the sand. It’s just so unrealistic as a parent today to think that your kid isn’t sexually active or being influenced by kids who are.
Are parents generally reluctant to talk to their kids about sex?
Yes. Parents just don’t want to talk about sex. They think that if they don’t talk about it, then nothing is going to happen. My film is geared to really wake parents up [to the reality that the opposite is true].

It’s no wonder the majority of kids don’t enjoy their first sexual experience in this country. They’re not prepared for it, they’re usually drunk or doing drugs, and their parents don’t know about it.

In terms of [improving] sexual health outcomes for adolescents, we have to start being more respectful of young people. They have a right to this information. The more information kids have about sex, the longer they wait to become sexually active. And they are more likely to do it safely.

Would you say sex is stigmatized in the United States?
Stigma is a huge problem with HIV and sex in general. If you [are taught to] think about sex as being the most filthy, disgusting thing you could potentially do until the day you get married and then suddenly it’s supposed to become the most wonderful thing that you share with someone you love, [it’s hard to make that transition without having to overcome the] guilt, shame and fear [associated with sex outside marriage].
What about faith-based groups?
In terms of religion, I think [many faith-based groups are] extremely irresponsible about the way that they approach the subject of sex. Especially in the African-American and Latino communities, [many] churches aren’t talking about it.
How do we change what’s happening?
It’s about getting people to talk about sex in a healthy way in healthy places. For the most part, sex is only talked about publicly in a smutty way. It’s mentioned mostly in conjunction with porn, or shocking facts about teen pregnancy or something crazy and sensationalized. [The key to a healthier approach to sexuality] is about changing the way we integrate the topic at home, at school, at houses of worship and within the larger community. We need to all be able to get on the same playing field to talk about sexuality in a healthy way.
How do attitudes about sex differ outside the United States?
One of the reasons I made this film is to really try to open people’s eyes to not just the problem, but also the solution. Western Europe has the best health outcomes for adolescent sexuality in the world. They look at sex with a healthy attitude. They realize that teenagers are going to have sex, [so they] prepare them for it.

I’m from Australia, where the last thing that parents want you to get when growing up is skin cancer. From a young age, you are taught to use sunscreen, wear a hat and wear a T-shirt. Would you want your kid to get skin cancer? No.
Would you want your kid to get a sexually transmitted infection, to become pregnant or to have sex against their will? No, no, no. Do you want them to learn about sex from porn? If you’re answering no to all these things, then you should ask yourself what you as a parent are doing to change it.
What would you say to a parent or a faith-based leader who’s struggling to broach the topic of sexual health with their teens?
We were all kids once. Kids want to do what kids want to do. You need to get real for their sake and have a conversation with them. As a parent, wouldn’t you want to be a part of your kid’s life? Wouldn’t you want to be responsible for your child having a really full, amazing life, including a great, healthy sexual life?