For Gay and Bi Men With HIV, Care and Treatment Stats Are Improving

An increasing proportion of those living with HIV are in care and on successful treatment, but there is still much room for improvement.

Key metrics in the diagnosis, care and treatment of HIV among men who have sex with men (MSM) living with the virus are improving, although not quickly enough to reach ambitious targets for controlling the epidemic. This is according to a new Centers for Disease Control and Prevention HIV surveillance analysis, published in Morbidity and Mortality Weekly Report.

On the whole, MSM have the virus better under control compared with the rest of the U.S. HIV population, according to CDC estimates. While perhaps half of all people living with the virus had a fully suppressed viral load in 2014, a new CDC report puts that figure at slightly above 60 percent for HIV-positive MSM (according to 2015 data).

An estimated 2 percent of the U.S. population, MSM made up 70 percent of new HIV diagnoses in 2015, including 3 percent who also had injection drug use as a risk factor.

In February, at the 2017 Conference on Retroviruses and Opportunistic Infections (CROI) in Seattle, the CDC announced findings that the estimated rate of annual new HIV infections declined 18 percent between 2008 and 2014, following two decades of stagnation. Additionally, by 2014, the long-rising annual HIV diagnosis rates among MSM had finally leveled off (the rate has been declining among white MSM for years), according to CDC research presented at CROI. Meanwhile, diagnosis rates among other risk groups, including women and injection drug users (IDUs), have steadily declined. 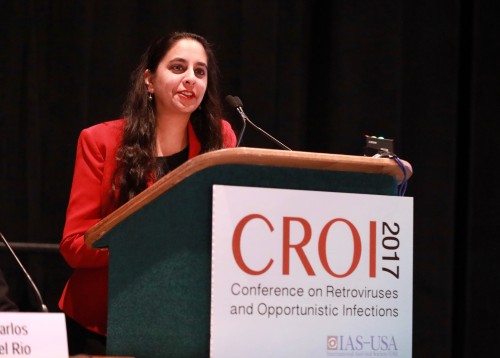 In July, the CDC updated its estimates of the proportion of individuals engaged in the various progressive stages of what is known as the HIV care continuum, stating that, based on 2014 data, 85 percent of the U.S. HIV population of 1.1 million people were diagnosed, 62 percent were receiving care, 48 percent were retained in ongoing care and 49 percent were virally suppressed. Given recent CDC analyses indicating a rising overall viral suppression rate, today’s figure is likely higher than 50 percent.

The new MSM-focused CDC report is based on an analysis of National HIV Surveillance System data regarding MSM age 13 and older, excluding MSM IDUs, from 38 jurisdictions (37 states and the District of Columbia) that provide comprehensive laboratory reporting on HIV. Together, these jurisdictions account for 70.4 percent of cumulative diagnoses of the virus among MSM through 2014.

A total of 19.1 percent of the 19,170 MSM diagnosed with HIV in the 38 jurisdictions in 2015 had already progressed to HIV stage 3, which is synonymous with AIDS. Such advanced HIV disease indicates that these individuals were likely living with the virus for many years before finally receiving a diagnosis. Otherwise, 26.1 percent had HIV stage 1 upon diagnosis with the virus, indicating a relatively robust immune system, and 34.3 percent had stage 2, meaning a somewhat compromised immune system. There were no data on the HIV stage for 20.5 percent of the men.

According to the 2015 data set, 84 percent of those diagnosed with HIV were promptly linked to care within three months post–HIV diagnosis, including 74.7 percent linked to care within one month. The CDC researchers compared these figures with 2010 data from the 19 jurisdictions that provided comprehensive data at that time. In 2010, 77.5 percent of those diagnosed with HIV were linked to medical care for the virus within three months. In 2010,  50.9 percent and of those MSM living with HIV were retained in ongoing medical care for the virus compared with 57.7 in 2015; in 2010, 42 percent were virally suppressed compared with 61.2 in 2015.