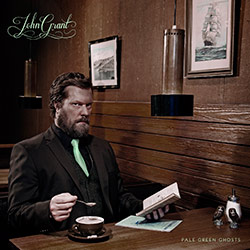 Fresh off his 2010 solo debut, Queen of Denmark, American singer-songwriter John Grant was shopping for shoes in Berlin when he found out about an exposure to HIV. “I received a text from a guy I’d had unprotected sex with stating, ‘I have some bad news.’ My blood froze,” Grant recalls, “because I knew he could only be talking about one thing.”

The HIV diagnosis did not derail his career or his hard-earned sobriety. His new album, Pale Green Ghosts—the title refers to Russian olive trees along a Colorado highway—is a haunting, quirky fusion of ’70s folk rock and ’80s electronica (think of Joni Mitchell and Dead Can Dance). Grant announced his status on stage, during a concert with Hercules and Love Affair—and he wrote about HIV in the track “Ernest Borgnine,” which he describes as “my personal take on Woody Allen’s The Purple Rose of Cairo. It’s about the absurdity of avoiding the harsh reality of the diagnosis by escaping into the world of movies and asking myself what one of my favorite actors would do.” Also, he says, “I wanted to write about the anger I felt towards myself because I allowed this to happen.”

Yet Grant, now in his mid-40s, shows plenty of compassion and strength too. “HIV does not diminish your worth as a human being in any way,” he advises anyone dealing with a diagnosis. “Be gentle with yourself.” His lyrics to “Glacier” would also resonate:

This pain it is a glacier moving through you / And carving out deep valleys / And creating spectacular landscapes / And nourishing the ground / With precious minerals and other stuff / So don’t you become paralyzed with fear / When things seem particularly rough.