Behind the Headlines
In the article “A Broken System Births a Miracle Child” (March 7, 2013), Jim Merrell of the HIV Prevention Justice Alliance examined the story behind the case of the Mississippi baby who might be functionally cured of HIV. Click here for more info.

This article deals with two subjects. One is the supposed “cure” of a child with HIV, and only time will tell on that issue. The other is for-profit “health care,” which should be a disgrace in such an alleged progressive and wealthy country. Our health care system is broken, as are so many of our systems, but still we cry, “We’re No. 1!” We should be embarrassed.

Exactly how is this a “failure of the system”? Quite possibly a failure of the education system, but the rest of your comments are fairly unfounded. Mississippi is one of the poorest states in the United States. [In this] seemingly unending cycle,  poverty and lack of education go hand-in-hand. It’s not the flaw of the health care system when people aren’t smart enough to seek care and don’t follow up…it’s the flaw of the individual.

[The author is] quick to find blame with everyone else without once acknowledging the mother’s role for her situation. But that wouldn’t be PC. Does that mean we lose compassion for her? No! But does it mean everyone else should be blamed for her lack of reasonable decision-making? No! The failures here are with the mother having unprotected sex, not getting any HIV testing, opting out of any prenatal care, and not following up with the wealth of free services that every state provides.

I love how the Southerners who have commented on this post talk about personal responsibility but didn’t bother to read the article where the author basically made the case that it’s the responsibility of the state to care for its people. I’m happy I escaped from the South! The medical system is a joke. Especially in Mississippi.
Michael, Los Angeles

I get the stigma-reducing power an HIV Coming Out Day could have, but when I look to the news and still see people being arrested for having sex while HIV positive (everything from reckless endangerment to attempted murder) it freaks me out. It terrifies me to think how some might react to my coming out as HIV positive. Stigma is the least of my concerns.

I think Michael Kaplan is spot on! I have been HIV positive since 1985 and feel blessed to have outlived many of my peers. I have always been out with my status and will tell anyone who asks. Silence promotes ignorance, but being “HIV Out” demands compassion!

I am a 61-year-old woman with HIV/AIDS. For me, the most stigma comes from myself with the hiding and covering up. Having a National HIV Coming Out Day would provide the structure to talk about our experience with HIV. That doesn’t come up in casual conversation. Somebody print the T-shirts; I’ll buy and wear one!

Coming out as positive [may] benefit the whole HIV community, but while helping the masses, am I hurting myself? After 15 years, I still don’t think my family is ready for the news.

Bad idea. Publicly coming out as HIV positive won’t help and is guaranteed to make one a target. Coming out to friends and loved ones is different and can be a powerful agent for change.

End of an Era
In the article “Thoughts on the End of NAPWA” (February 21, 2013), members of the HIV/AIDS community weighed in on the news that the National Association of People With AIDS (NAPWA) ceased operations and filed for Chapter 7 bankruptcy. NAPWA was founded in 1983.

I’m unfamiliar with the inner workings of NAPWA, and I hope that a bankruptcy doesn’t expose any improprieties, as happens so many times when an organization waxes political in order to get things done. We need an organization in the United States that is able to focus on living with HIV, instead of being disabled and dying with it, without forgetting that HIV is still a global disaster. Our voice needs a much broader sound.

It is a tragedy that NAPWA is filing for bankruptcy. I think that no matter how great the vision of the organization, if it isn’t being managed properly, the organization will fail. It always comes down to money doesn’t it?

This made me cry.

As a person living with AIDS for 28 years, I am disappointed to hear about NAPWA and wonder just what this negative news will do to the amount of contributions to other AIDS organizations. 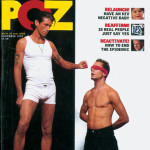