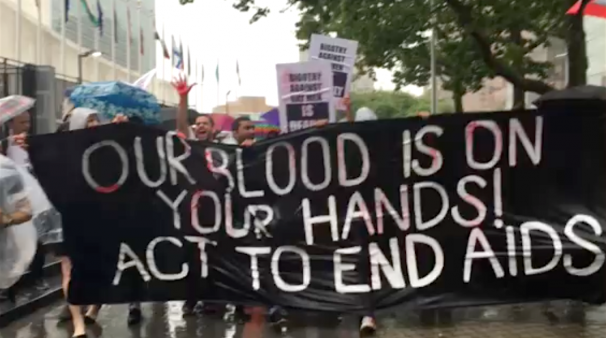 U.N. member states convened Wednesday, June 8, to adopt the 2016 U.N. Political Declaration on Ending AIDS—a document that lists steps to end the global epidemic by 2030—and to kick off the three-day U.N. High-Level Meeting on Ending AIDS.

But activists walked out of the Wednesday meeting. They also took to the streets outside the United Nations headquarters in New York City, carrying a banner that read, “Our blood is on your hands! Act to end AIDS.”

“This political declaration has fatal flaws,” said Maureen Milanga of Health GAP, which protested the U.N. meeting. “We welcome the new target of reaching 30 million people by 2020 with lifesaving treatment and the pledge to achieve viral suppression for 90 percent of people on treatment through scaling up differentiated models of quality care. But unless dangerous donor funding cuts are reversed, millions will be denied access to medicine.”

According to a Health GAP press release, although the U.N. declaration includes expanding funding to fight the epidemic, the funding has in fact flatlined or decreased.

What’s more, the final declaration removed critical language with regard to respecting the human rights of men who have sex with men (MSM), sex workers, transgender people, people who use drugs and other marginalized groups at high risk for HIV.

“The bigotry on display during these negotiations has been astonishing,” said Jamila Headley of Health GAP in the press release. “After 35 years of the AIDS crisis, governments must know they can’t end AIDS until they end deadly exclusion and human rights violations.” 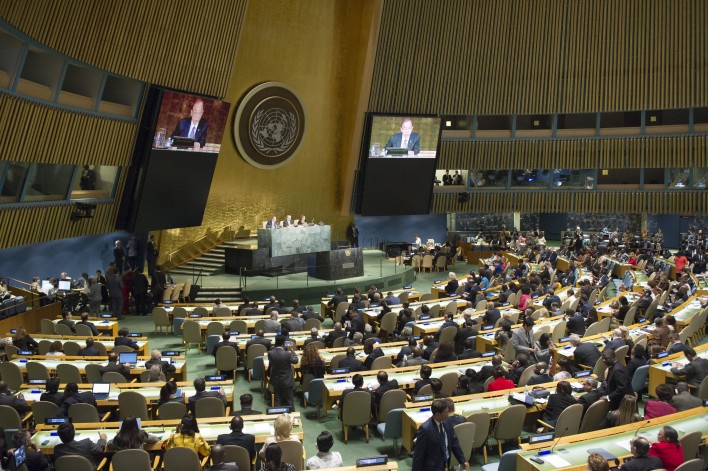 The UNAIDS press release points out that:

“Remarkable progress has been made in the response to HIV since the last United Nations General Assembly Meeting on HIV and AIDS, in 2011. By December 2015, 17 million people were accessing antiretroviral medicines and new HIV infections among children and AIDS-related deaths have been considerably reduced. There has also been progress in reducing tuberculosis deaths among people living with HIV.

However, the number of new HIV infections among adults has remained almost static since 2010 and too many people are being left behind in the response, including young women and girls and specific groups of people, including sex workers, prisoners, gay men and other men who have sex with men, transgender people and people who inject drugs.

And to watch a video of protests and learn about a related event, read “Excluded From the U.N. AIDS Meeting? Hold Your Own Forum.”