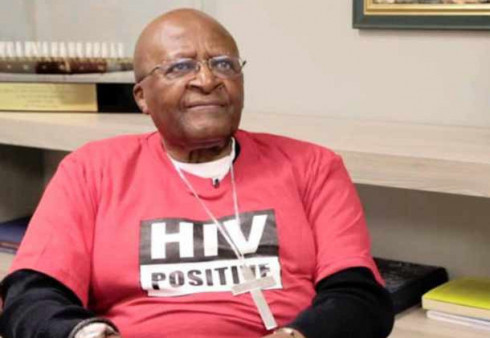 Archbishop Tutu Was One of Us

As a Black leader, an HIV advocate and the father of a lesbian, Archbishop Desmond Tutu was one of us.

By Jesse Milan Jr., President and CEO of AIDS United

The death of Archbishop Desmond Tutu should not go unobserved by HIV advocates, for he was one of us, and he was always for us.

He was one of us as a Black leader from a nation ravaged by HIV. He was the Black father of a Black lesbian. He was a fearless and tireless advocate for our issues and our rights. He made clear that prevention and care for HIV and LGBTQ rights were part and parcel of what people of faith should cry out for, whether we are clergy or lay. And he inspired millions of us decade after decade, whether we are church people or not.

I felt his kinship with us personally. I was blessed to be in his presence and even to stand in a spot where he stood.

Tutu was the guest speaker in 1999 when the White House announced an additional $100 billion to fight HIV globally. I was mesmerized that day by his dazzling exuberance and hope that his people — our people — would have new resources to end the global HIV epidemic. And I witnessed him never stop pushing his country and others to respond to the ever-continuing pandemic of HIV.

A few years after my first encounter with him, I was privileged to stand in his pulpit at St. George’s Cathedral in Cape Town to deliver a sermon of my own on HIV. As I prepared to ascend the steps to that high pinnacle someone whispered to me, “How does it feel to stand in the spot where Bishop Tutu speaks?” It was an unfathomable honor, and I feel the power of his example to say and do what is needed to this very day.

As a lifelong Episcopalian, I am part of the worldwide Anglican Communion where Tutu held posts, including archbishop of Cape Town. I was always proud to know that he was one of us, and I felt connected to him not only as part of his flock of faith, but as part of his wider congregation of admirers who strive to make right what is wrong and build up what is needed for equity, fairness and rights.

People of all faiths and cultures were inspired by him. He led the charge against Apartheid and for racial justice that stretched across the Black diaspora from his diocese in Cape Town to anywhere Black people struggle for equality. He knew firsthand the impact of systemic racism in health care displayed by the millions of deaths from AIDS in his homeland. He saw firsthand the evil of homophobia and transphobia. His own daughter lost her priestly license when she married a woman. And he was the first African Anglican leader to support the first gay man to be consecrated a bishop in the American wing of the Anglican Communion.

Tutu called out the evils that surround our people. The evil of inequities in health care and health outcomes, be they racial or gender based, identity or place based. He called out LGBTQ injustice within his denomination and beyond. He kept going, even when retired, to call out the evil of inequity and inaction against a new disease, and he inspirited us even in his final year on earth by publicly sharing his own inoculation and urging that everyone should be vaccinated against COVID-19.

My heart sank when I read the news of his death. But Tutu was 90. He certainly deserves eternal rest and rewards for his tireless advocacy and discipleship. Great leaders like Tutu who pass on leave not just their lessons and legacy behind, they leave behind work that remains unfinished.

Tutu was one of us, and I’m certain he felt that we were all his kin. May he rest in peace and power.

And may we who were inspired by Tutu continue on. The evil he worked to fight is still lurking and rising in our presence. His fight and ours go on.