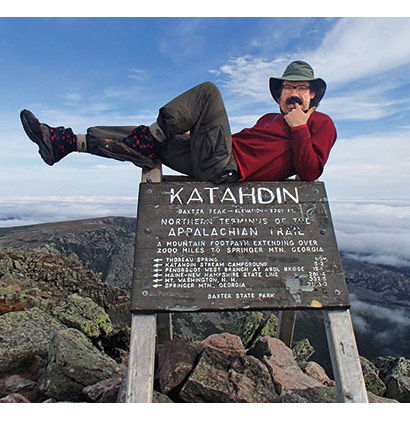 Ross Hayduk grew up in Harrisonburg, Virginia, “in the shadow of the Appalachian Trail” as he likes to say. Though San Francisco is now home, Hayduk recently returned to his roots. On September 6, 2012—his 45th birthday—as he reached the summit of Mount Katahdin in Maine, he became the first HIV-positive man to hike 2,084 miles of the trail in less than six months, putting him in the “2,000-miler club” and raising more than $6,000 for HIV/AIDS service organizations like the National AIDS Memorial Grove.

“My HIV status directed many of my decisions for my hike,” says Hayduk, a professional fundraiser and regular volunteer at Pets Are Wonderful Support–San Francisco. “I had to carry a month’s worth of HIV and bipolar medications. I could not stay in shelters for fear of hantavirus carried by shelter mice, so I was forced to sleep in my tent most nights.” His fondest memories of the trek include the “trail angels” who left snacks and sodas in coolers along the trail, and “fellow thru-hikers who affirmed me as an HIV-positive hiker and sustained me with their friendship.”

And yet he hiked solo on nearly 120 days. “I realized I am very much a people person—it was not good to be alone in the wilderness,” he says. “I am glad to be back.” We’re glad to have him back—and to ask him a few questions.

What is your greatest regret?
Being introduced to crystal meth. An eight-month struggle with addiction resulted in my contracting HIV in 2004.

If you could change one thing about living with HIV, what would it be?
The stigma surrounding HIV. Being considered diseased, dirty, ruined and sick by HIV-negative guys.

What is your motto?
“No one can make you feel inferior without your consent,” [said by] Eleanor Roosevelt.